For the last two calendar years the Australian dollar has defied our expectations for weakness. But after hitting $US0.81 in January it’s been trending down as US interest rates fell below the Australian cash rate, the threat of a US-driven trade war increased and it recently broke below a short-term range around $US0.74 and fell as low as $US0.72 on fears of contagion to global growth from a crisis in Turkey. This note looks at outlook for the $A and why it makes sense for Australian-based investors to hold a decent exposure to foreign exchange.

What are the fundamental drivers of the $A?

The Australian dollar tends to move in line with relative price differentials over the long term. This is the theory of purchasing power parity (PPP) according to which exchange rates should equilibrate the price of a basket of goods and services across countries – see the next chart. 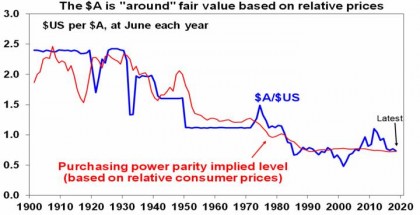 If over time Australian inflation and costs rise relative to the US, then the value of the $A should fall relative to the $US to maintain its real purchasing power and competitiveness. But in the short to medium term, swings in the $A are largely driven by swings in the prices of Australia’s key commodity exports and the terms of trade (when they go up the $A tends to rise and vice versa) and relative interest rates such that a rise in US rates relative to Australian rates makes it more attractive to park money in the US and hence pushes the $A down.

Why the $A is likely to fall further

At current levels, the Australian dollar at around $US0.7350 is around where it should be on a long-term purchasing power parity basis – see the first chart. But the $A rarely spends much time at the purchasing power parity level and tends to be pushed to extremes above and below it. Our view remains that the downtrend in the $A that started in 2011 when the iron ore price peaked at over $US190/tonne has further to go. The main reason is the interest rate differential in favour of the $A is likely to go further into negative territory as the Fed continues to hike rates and the RBA remains on hold. This is making it relatively less attractive to park money in Australia putting downwards pressure on the $A. The Fed is on track to hike rates again next month as the US economy has continued to strengthen highlighted by a very tight jobs market. This will take the Fed Funds rate to a range of 2-2.25%. If the RBA leaves rates on hold at 1.5%, as is almost certain, then the gap between Australian and US official interest rates will fall to -0.5-0.75%, from a whopping +4.5% in 2011. Periods of a low and falling official interest rate differential between Australia and the US usually see a low and falling $A. 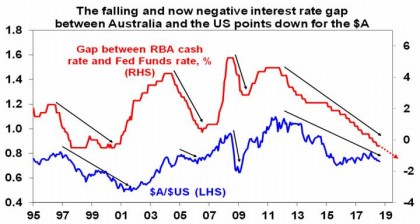 While some think that the RBA just follows the Fed there has often been significant divergences. This has notably been the case lately with the RBA hiking in 2009 (as the mining boom returned) and the Fed holding and the RBA continuing to cut in 2016 even though the Fed had commenced a tightening cycle. While US growth is running well above potential and has largely used up spare capacity, Australian growth has been running below potential and there is plenty of spare capacity. This is evident in the combination of unemployment and underemployment in the US running about as low as it ever gets whereas in Australia it’s about as high as it ever gets. 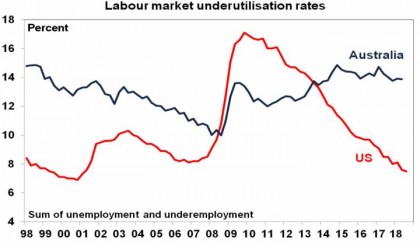 While there are some positive signs in Australia with investment picking up, strong export volumes and strong employment growth, uncertainty remains high around the housing sector and consumer spending. Wages growth and inflation also remain very low so the RBA is likely to be on hold for a long while yet as the Fed continues to hike. Given falling home prices in Sydney and Melbourne a rate cut cannot be ruled out if it threatens overall growth and inflation.

Our base case is that solid global growth will support commodity prices – particularly iron ore and coal – and that this will provide a floor for the $A in the high $US0.60s. However, history suggests we are still in a commodity price bear market after last decade’s surge in prices, the recent 20% or so plunge in metal prices is a warning of weakness and there are threats to emerging world growth from a rising $US, a potential contagion from Turkey, slower growth in China and from US trade policy. 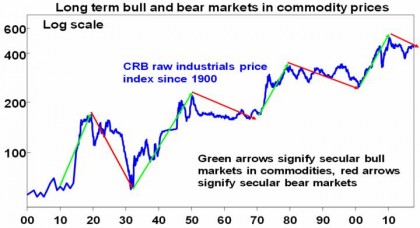 In the very short term the Australian dollar is oversold and this along with speculative short positions warns of a bounce higher. However, beyond this our assessment is that the $A has further to fall and will likely reach $US0.70 by year end.

With the risks skewed towards more downside in the value of the $A, there are several implications for investors. 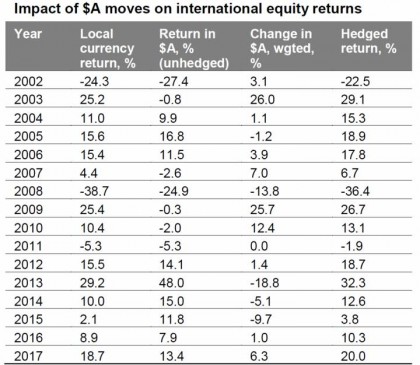 Second, if the global outlook turns sour, having an exposure to foreign currency provides protection for Australian investors as the $A usually falls in response to threats to global growth. As can be seen in the next chart there is a rough positive correlation between changes in global shares in local currency terms and the $A. Major falls in global shares associated with the emerging market/LTCM crisis in 1998, the tech wreck into 2001, the GFC, the Eurozone crises and the 2015-16 global growth scare saw sharp falls in the $A. This has been evident this year with worries about a trade war and Turkey weighing on the $A. So being short the $A and long foreign exchange provides good protection against threats to the global outlook. 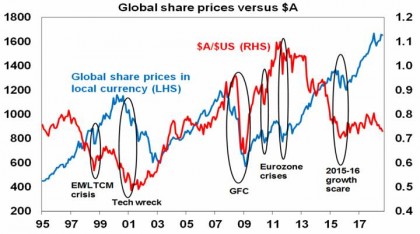 Finally, continuing weakness in the $A will be positive for Australian sectors that compete internationally like tourism, higher education, manufacturing, agriculture and mining.