The US economy – does the flattening yield curve indicate recession is imminent?

Ever since the Global Financial Crisis (GFC) there has been an obsession with looking for the next recession. In this regard, over the last year or so there has been increasing concern that a flattening yield curve in the US – ie the gap between long-term bond yields and short-term borrowing rates has been declining – is signalling a downturn and, if it goes negative, a recession in the US. This concern naturally takes on added currency given that the current US bull market and economic expansion are approaching record territory in terms of duration and given the trade war threat.

The increased volatility in shares seen this year, including a 10% or so pull back in global shares earlier this year, adds to these fears. Whether the US is about to enter recession is critical to whether the US (and hence global) bull market in shares is about to end. Looking at all 10% or greater falls in US shares since the 1970s (see the table in Correction time for shares?), US share market falls associated with a US recession are longer lasting and deeper with an average duration of 16 months and an average fall of 36% compared to a duration of 5 months and an average fall of 14% when there is no recession. Similarly, Australian share market falls are more severe when there is a US recession. So, whether a recession is imminent or not in the US is critically important in terms of whether a major bear market is imminent. This note assesses the risks.

The long US economic expansion and bull market

The cyclical bull market in US shares is now over nine years old. This makes it the second longest since WW2 and the second strongest in terms of percentage gain. And according to the US National Bureau of Economic Research the current US economic expansion is now 109 months old and compares to an average expansion of 58 months since 1945. See the next two tables. So, with the bull market and the economic expansion getting long in the tooth it’s natural to ask whether it will all soon come to an end with a major bear market. 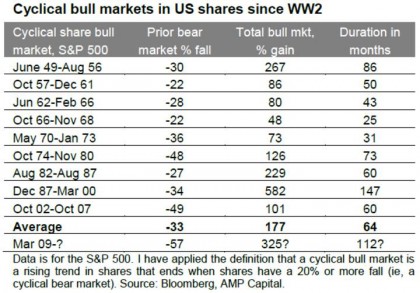 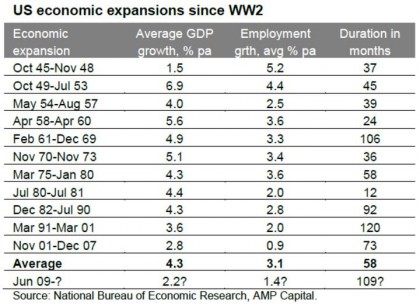 The yield curve is watched for two reasons. First, it’s a good guide to the stance of monetary policy. When short-term interest rates are low relative to long-term rates it indicates businesses can borrow short and lend (or invest) long & this grows the economy. But it’s not so good when short rates are above long rates – or the curve is inverted. And secondly an inverted US yield curve has preceded US recessions. So, when it’s heading in this direction some start to worry. However, there are several complications. 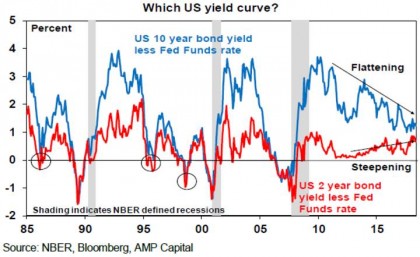 Second, the yield curve can give false signals – the traditional version flattened or went negative in 1986, 1995 and 1998 before rebounding – and the lags from an inverted curve to a recession can be long at around 15 months. So even if it went negative now recession may not occur until late 2020.

Third, various factors may be flattening the yield curve unrelated to cyclical economic growth expectations including still falling long-term inflation and real rate expectations, low German and Japanese bond yields holding down US yields and higher levels of investor demand for bonds post the GFC as they have proven to be a good diversifier to shares in times of crisis.

Finally, a range of other indicators which we will now look at are not pointing to an imminent US recession.

Watch for exhaustion, not old age

A key lesson of past economic expansions is that “they do not die of old age, but of exhaustion”. The length of economic expansions depends on how quickly recovery proceeds, excess builds up, inflation rises and the central bank tightens. The US economic recovery may be long, but it has been very slow such that average economic and employment growth has been around half that seen in post WW2 expansions. So as a result it has taken longer than normal for excesses to build up. Apart from flattening yield curves one area where the US is flashing warning signs is in relation to the labour market where unemployment and underemployment have fallen about as low as they ever go warning of a wages breakout and inflation pressure. 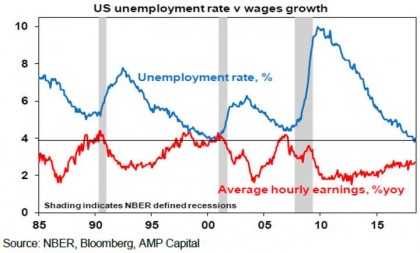 However, there is still arguably spare capacity in the US labour market (the participation rate has yet to see a normal cyclical rise) and wages growth at 2.7% remains very low. The last three recessions were preceded by wages growth above 4%. Secondly, while US GDP is now back in line with estimates of “potential”, what is “potential” can get revised so it’s a bit dodgy and more fundamentally, industrial capacity utilisation at 78% is still below normal of 80% and well below levels that in the past have shown excess and preceded recessions.

Thirdly, cyclical spending in the US as a share of GDP remain slow. For example, business and housing investment are around long term average levels as a share of GDP in contrast to the high levels in one or both seen prior to the tech wreck and GFC. 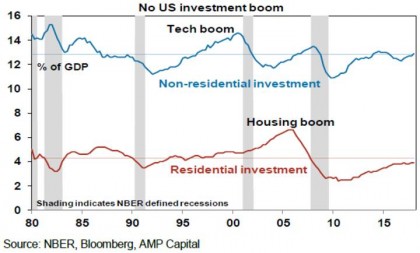 Finally, while the rising Fed Funds rate and flattening traditional yield curve is consistent with tightening US monetary policy, it’s a long way from tight. Past US recessions have been preceded by the Fed Funds rates being well above inflation and nominal economic growth whereas it’s still a long way from either now. See the next chart. 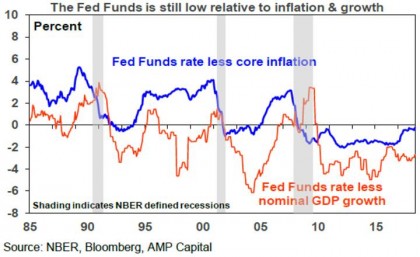 US likely to see overheating before recession

Apart from the amber lights flashing from the flattening yield curve and very low unemployment our assessment is that a US recession is still some time away as it will take time for excesses to become extreme and US monetary policy to become tight. Looked at another way, the US is still more likely to overheat before it goes into recession. We have been thinking recession is a 2020 risk. The end of the current fiscal stimulus around then would also be consistent with this. However, given the current slow pace in terms of building excess, that 2020 is a presidential election year – do you really think Trump will allow the US to go off a fiscal cliff then? – and with 2020 being the consensus pick for a downturn, the risk is that it comes later. Of course, an escalating trade war could mess things up earlier, although we still see a negotiated solution. The rising US budget deficit is a concern but it’s more of an issue for when the economy turns down as this is when investors will start to worry about its sustainability. And of course a 1987 style share market crash cannot be ruled out but probably requires a share market blow off before hand. In the meantime, the Fed has more tightening to do and while sharemarket volatility is likely to remain high as US inflation and short rates rise, excesses gradually build and given risks around Trump and trade, with recession still a way off the US and global share bull market likely still has some way to go.

Important notes
While every care has been taken in the preparation of this article, AMP Capital Investors Limited (ABN 59 001 777 591, AFSL 232497) and AMP Capital Funds Management Limited (ABN 15 159 557 721, AFSL 426455) makes no representations or warranties as to the accuracy or completeness of any statement in it including, without limitation, any forecasts. Past performance is not a reliable indicator of future performance. This article has been prepared for the purpose of providing general information, without taking account of any particular investor’s objectives, financial situation or needs. An investor should, before making any investment decisions, consider the appropriateness of the information in this article, and seek professional advice, having regard to the investor’s objectives, financial situation and needs. This article is solely for the use of the party to whom it is provided.