The plunge in shares & flow on to super

Usually share markets are relatively calm and so don’t generate a lot of attention. But periodically they tumble and generate headlines like “billions wiped off share market” & “biggest share plunge since…” Sometimes it ends quickly and the market heads back up again and is forgotten about. But once every so often share markets keep falling for a while. Sometimes the falls are foreseeable (usually after a run of strong gains), but rarely are they forecastable (which requires a call as to timing and magnitude)…despite many claiming otherwise. In my career, I have seen many periodic share market tumbles. 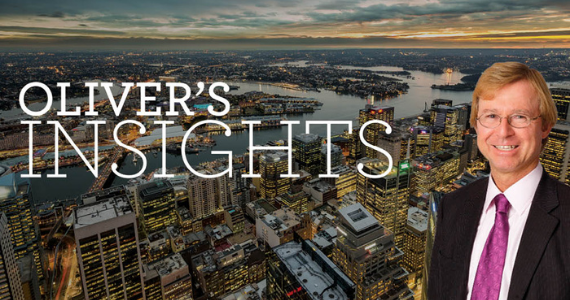 And so it is again – with share markets starting the year on a sour note and despite a few bounces along the way having several legs down with another sharp fall over the last two weeks. From their all-time highs to their lows in the past week US shares have now fallen 24%, global shares have fallen 21% and Australian shares have fallen 16%. Always the drivers are slightly different. But as Mark Twain is said to have said “history doesn’t repeat but it rhymes”, and so it is with share market falls. This means that from the point of basic investment principles, it’s hard to say anything new. Which is why this note may sound familiar with “key things for investors to keep in mind”, but at times like this they are worth reiterating.

The key drivers of the fall in shares remain: 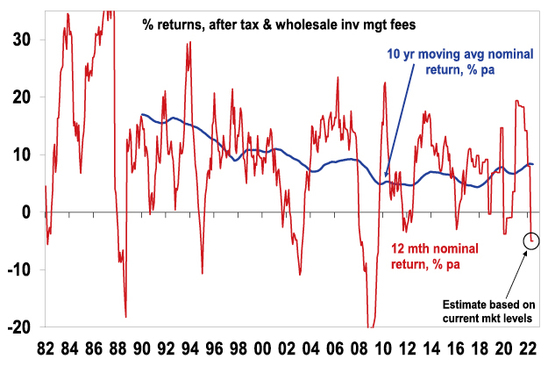 Key things for investors to bear in mind

Sharp market falls are stressful for investors as no one likes to see their investments (including their super) fall in value. But there are some key things investors should keep in mind:

First, while they unfold differently, periodic share market corrections and occasional bear markets (which are usually defined as falls greater than 20%) are a normal part of investing in shares. For example, the last decade regularly saw major pullbacks. See the next chart. 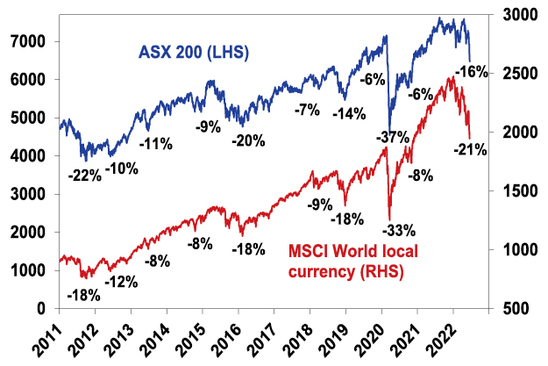 And, as can be seen in the next chart rolling 12 month returns from shares have regularly gone through negative periods. 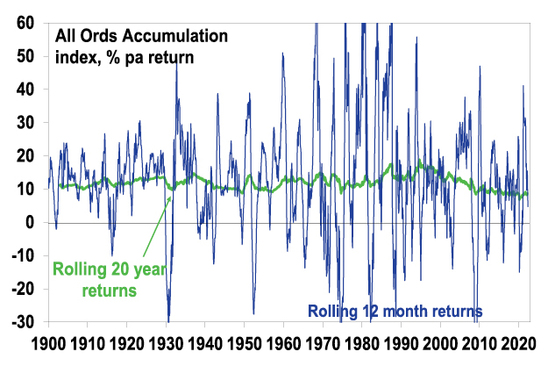 But while the falls can be painful, they are healthy as they help limit excessive risk taking. Related to this, shares climb a wall of worry over many years with numerous events dragging them down periodically (next chart), but with the long-term trend ultimately up & providing higher returns than other more stable assets. As can be seen in the previous chart, the rolling 20-year return from Australian shares has been relatively stable and solid. Which is why super funds have a relatively high exposure to shares along with other growth assets. Bouts of volatility are the price we pay for the higher longer-term returns from shares. As can be seen in the first chart in this note while this financial year has been rough for super funds longer term returns have been solid & so recent weakness has to be seen in perspective.

Australian shares have climbed a wall of worry 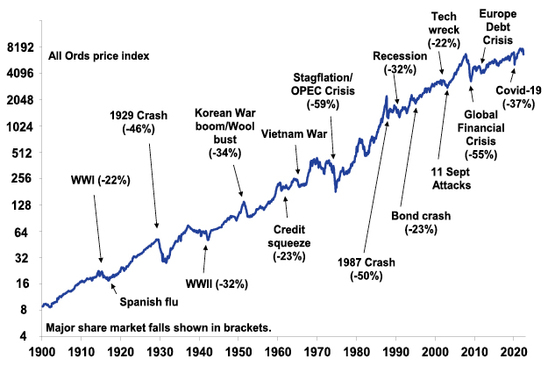 Second, historically, the main driver of whether we see a correction (a fall of say 5% to 15%) or even a mild bear market (with say a 20% or so decline that turns around relatively quickly like we saw in 2015-2016 in Australia – which may be called a “gummy bear market”) as opposed to a major (“grizzly”) bear market (like that seen in the mid-1970s or the global financial crisis when shares fell by around 55%) is whether we see a recession or not – notably in the US, as the US share market tends to lead most major global markets. We remain of the view that a global recession can be avoided – if inflation starts to slow later this year or early next (as supply improves) taking pressure off central banks and in Australia as growth initially cools faster than expected (as the plunge in consumer confidence suggest that it will) putting a cap on how much the RBA needs to hike interest rates allowing it to avoid triggering a recession. But with inflation still surprising on the upside and central banks hiking rates aggressively the risks have increased to the point that its now a very close call. Either way it’s still too early to say that shares have bottomed.

Of course, short-term forecasting is fraught with difficulty and should not be the basis for a long-term investment strategy, so it’s better to stick to long term investment principles.

Third, selling shares or switching to a more conservative superannuation investment strategy whenever shares fall sharply just turns a paper loss into a real loss with no hope of recovering. Even if you get out and miss a further fall, the risk is that you won’t feel confident to get back in until long after the market has fully recovered. The best way to guard against deciding to sell on the basis of emotion after falls in markets is to adopt a well thought out, long-term strategy and stick to it.

Fourth, when shares fall, they’re cheaper and offer higher long-term return prospects. So, the key is to look for opportunities’ pullbacks provide. It’s impossible to time the bottom but one way to do it is to “average in” over time. Fortunately, the Australian superannuation system does just that by regularly putting money into shares for workers (via their super) effectively taking advantage of the fact they are cheaper.

Fifth, while share prices have fallen dividends have not and so the dividend yield has increased. Australian shares are offering a very attractive dividend yield compared to bank deposits despite rising deposit rates. Companies don’t like to cut their dividends, so the income flow you are receiving from a well-diversified portfolio of shares is likely to remain attractive. 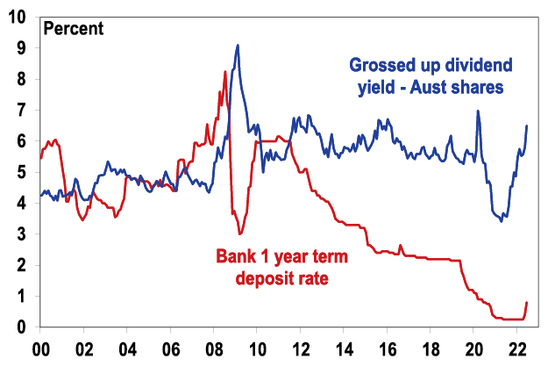 Sixth, shares and other related assets often bottom at the point of maximum bearishness, ie, just when you and everyone else feel most negative towards them. So, the trick is to buck the crowd. “Be fearful when others are greedy. Be greedy when others are fearful,” as Warren Buffett has said.

Finally, turn down the noise. At times of uncertainty like now, the flow of negative news reaches fever pitch. Talk of billions wiped off share markets and of “crashes” help sell copy and generate clicks. But less newsy are the billions that market rebounds and the rising long-term trend in share prices add to the share market. Moreover, they provide no perspective and only add to the sense of panic. All of this makes it harder to stick to an appropriate long-term strategy – which is particularly important when it comes to super as it has to be seen as a long term investment, except for many of those near to retirement. So best to turn down the noise and watch the new Elvis biopic!

Important note: While every care has been taken in the preparation of this document, AMP Capital Investors Limited (ABN 59 001 777 591, AFSL 232497) and AMP Capital Funds Management Limited (ABN 15 159 557 721, AFSL 426455) make no representations or warranties as to the accuracy or completeness of any statement in it including, without limitation, any forecasts. Past performance is not a reliable indicator of future performance. This document has been prepared for the purpose of providing general information, without taking account of any particular investor’s objectives, financial situation or needs. An investor should, before making any investment decisions, consider the appropriateness of the information in this document, and seek professional advice, having regard to the investor’s objectives, financial situation and needs. This document is solely for the use of the party to whom it is provided.