Bushfires and the Australian economy

The Australian bushfire season that began in September has been horrific with more than 7 million hectares of bush destroyed, more than 25 deaths, significant loss of livestock, estimates of more than a billion wildlife animals killed and more than 1800 homes destroyed. More than 200 fires are still burning. Following the intensification of the bushfires over the Christmas/New Year period attention has now turned to the impact on the economy. This note looks at the key impacts.

The short-term impact on GDP and wealth

Physical disasters invariably cause a brief disruption to economic activity as measured by GDP followed by a boost as wealth destroyed by the disaster is rebuilt. In this sense measured across a year or so they are often seen as positive for economic growth, albeit this seems perverse particularly for those directly impacted.

The damage to property and wealth flowing from the bushfires will likely run into many billions. For example, the Victorian Black Saturday bushfires are estimated to have cost $4.4bn, whereas the current fires have covered an area 15 times bigger. So there will be a very big rebuilding boost to economic activity to come once the fires are brought under control. But the fires have been very widespread, have been going on for several months now and the crisis is continuing, so there will be a significant short-term negative impact and it likely will involve more than a short-term disruption to economic activity. 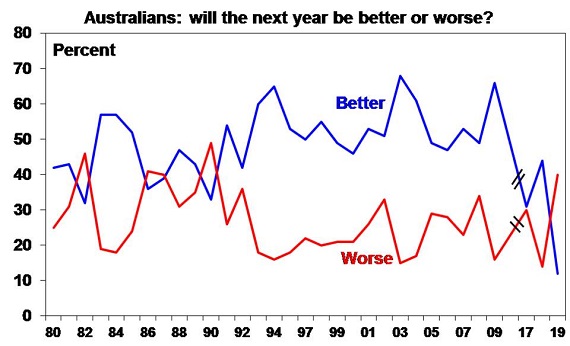 This may exaggerate how bad things really are. The economy is still in far better shape than it was at the time of the early 1990s recession (I was there, I remember!). But a combination of more negative news flow today due to the rise of social media, more divisive politics and expectations rising faster than reality may be altering perceptions of the economy in a negative way and exaggerating the gloom. Nevertheless, a range of other surveys also show that consumers are uncertain and depressed, and this looks to have intensified since Christmas. The constant terrible news since October about the bushfires along with the smoke in cities is likely weighing further on the national psyche adding to weakness in consumer spending as Australians feel less motivated to spend when their fellow Australians are suffering. The hit to household spending power from higher prices for food and a likely rise in insurance premiums flowing from the fires will only accentuate this.

Taken together we expect a detraction from GDP due to the bushfires of around 0.4% starting in the December quarter but mainly impacting the March quarter before a rebuilding boost kicks in from the June quarter. Given the uncertainty, the range around this negative impact is -0.25% up to a worse case of -1% of GDP should the fires continue on a widespread basis through the rest of summer. The rebuilding boost should reverse much of this drag later in the year, but there is considerable uncertainty around this as the impact on tourism and consumer spending may linger longer.

A big proximate contributor to the severity of the bushfires is the severe drought gripping much of Australia. This has already driven a decline in agricultural production, which has been directly detracting around 0.2 percentage points from GDP growth for the last two years. Unfortunately, the Southern Oscillation Index is still in El Nino territory pointing to ongoing relatively dry conditions in eastern and top-end Australia. 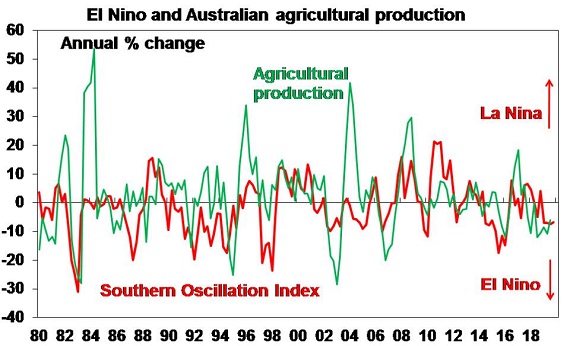 With the bushfires likely to contribute to a flow of weak economic data for the next several months, questioning the RBA’s “gentle turning point” in the economy and resulting in a movement away from the achievement of the RBA’s full employment and inflation goals, the fires have only added to the pressure for more policy stimulus. We remain of the view that the RBA will cut the cash rate to 0.5% in February (with the market probability now up to 53.4% from a low of 36% before Christmas) and to 0.25% probably in March. The bushfires will push up food prices and insurance premiums but the RBA’s focus on underlying inflation will mean that it should look through this. In fact, increases in such prices will act as a tax on consumer spending power and are negative for spending and so could depress underlying inflation.

The pressure for further fiscal stimulus has also intensified. The Federal Government has already committed an additional $2bn for bushfire recovery to be spent this year and next (which is relatively small at 0.05% of GDP per year) and the NSW Government has committed another $1bn. However, the total hit to government budgets from the bushfires is likely to be much greater than this given assistance under existing disaster programs, extra expenses associated with fighting the fires and the impact of slower growth in the short term on revenue flows.

More broadly given the hit to confidence a circuit breaker is arguably needed to help boost economic growth. Monetary policy alone is unlikely to be enough. So there is a need for a broader fiscal stimulus – maybe in the form of a bring forward of the personal tax cuts, an increase in Newstart and broad based investment allowances. To have an impact it needs to be at least 0.5% of GDP (or around $10bn).

Rightly in the face of the pain caused by the bushfires the Government has relaxed the focus on achieving a budget surplus and it is now questionable as to whether it will be achieved this year and next. That is not a major problem in the relative scheme of things given the relatively good state of Australia’s public finances.

The bushfires pose a number of longer-term challenges.

First, increased pressure to adopt a tougher stance in reducing carbon emissions. While Australia has always had droughts and bushfires we have been warned for more than a decade now that the world and Australia is getting warmer, that increasing global greenhouse gas emissions are likely contributing to this and that in the absence of actions to reduce emissions the world will get significantly warmer with the outcome being rising sea levels and more extreme weather events – including storms, floods and droughts – with more severe bushfires an outcome of the latter. 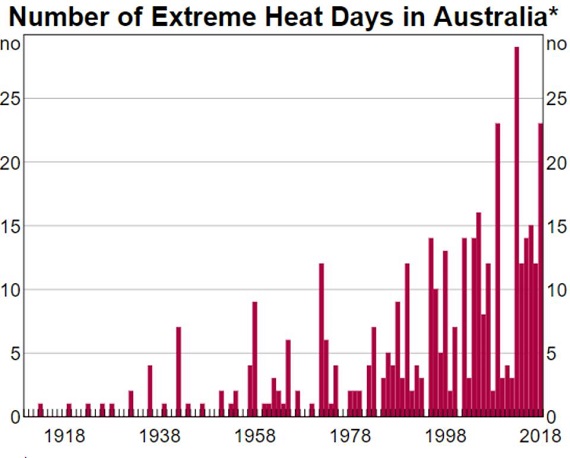 Second, the damage inflicted by the extreme bushfires highlights the need for investors to be aware of industries and businesses that are vulnerable to climate change risk – whether it comes from the physical impact from climate change or via measures to reduce emissions.

Thirdly, the severity of the bushfires and the risk that this is the new normal will necessitate better strategies for reducing the risk to property posed by future bushfires.

Finally, in the absence of policy action the bushfires risk accentuating the decline of some regional communities particularly where key industries have been destroyed by the fires – with some taking their insurance and rebuilding elsewhere. This will only further centralise Australia in its big cities adding to all the costs that entails – notably congestion and expensive housing.

This will also keep the Australian dollar relatively soft.

So far the Australian share market appears to be looking through the short-term hit to economic growth focusing more on the rebuilding boost, but the negative impact of the bushfires risks seeing it remain a relative underperformer versus global shares.