Why I still love dividends and you should love them too

Prior to the 1960s most share investors were long-term investors who bought stocks for their dividend income. Investors then started to focus more on capital growth as bond yields rose relative to dividend yields on the back of rising inflation. However, thanks to an increased focus on investment income as baby boomers retire, interest in dividends has returned. This is a good thing because dividends are good for investors in more ways than just the income they provide.

Australian companies pay out a high proportion of earnings as dividends. This is currently around 65% compared to around 45% for global shares. However, some argue that dividends don’t matter – as investors should be indifferent as to whether a company pays a dividend or retains earnings that are reinvested to drive growth. Or worse still, some argue that high dividend pay outs are a sign of poor long-term growth prospects, that they are distraction from business investment or that they are often not sustainable. And of course, some just see dividends as boring relative to speculating on moves in share values. My assessment is far more favourable.

Seven reasons why dividends are cool

First, dividends do matter in terms of returns from shares. For the US share market, it has been found that higher dividend payouts lead to higher earnings growth1. This is illustrated in the next chart, which shows that for the period since 1946 when US companies paid out a high proportion of earnings as dividends (the horizontal axis) this has tended to be associated with higher growth in profits (after inflation) over the subsequent 10 years (vertical axis). And higher profit growth drives higher returns from shares. So dividends do matter and the higher the better (within reason). There are several reasons why this is the case: when companies retain a high proportion of earnings there is a tendency for poor hubris driven investments; high dividend payouts are indicative of corporate confidence about future earnings; and high payouts indicate earnings are real. 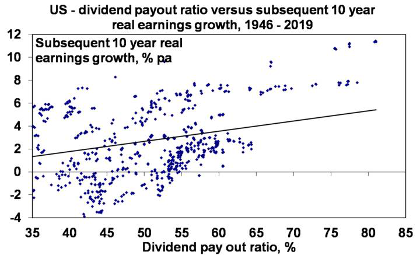 Second, dividends provide a stable contribution to the total return from shares, compared to the year-to-year volatility in capital gains. Of the 11.7% pa total return from Australian shares since 1900, just over half has been from dividends. 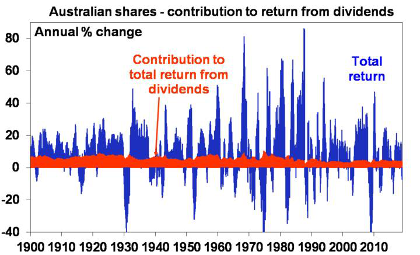 Third, the flow of dividend income from a well-diversified pool of companies is relatively smooth. As can be seen below, dividends move in line with earnings but are smoother. 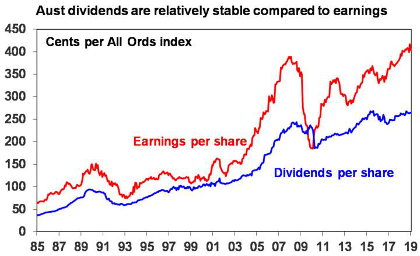 Companies like to manage dividend expectations smoothly. They rarely raise the level of dividends if they think it will be unsustainable. Sure, some companies do cut their dividends at times, but the key is to have a well-diversified portfolio of sustainable and decent dividend paying shares.

Fourth, investor demand for stocks paying decent dividends will be supported as the ranks of retirees swell.

Fifth, with the scope for capital growth from shares diminished thanks to relatively high price to earnings ratios compared to say 40 years ago, dividends will comprise a much higher proportion of total equity returns. More than half of the total medium-term return from Australian shares is likely to come from dividends, once allowance is made for franking credits.

Sixth, dividends provide good income. Grossed up for franking credits the annual income flow from dividends on Australian shares is around 5.7%. That’s $5700 a year on a $100,000 investment in shares compared to $2150 a year in term deposits (assuming a term deposit rate of 2.15%). 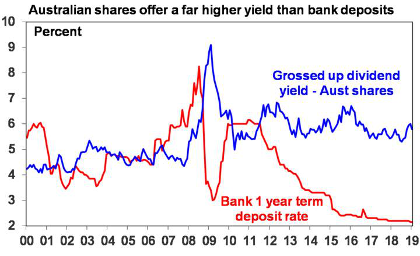 Finally, while Australian shares are still 10% below their 2007 high, once reinvested dividends are allowed for (ie looking at the ASX 200 accumulation index) the market is well above it. 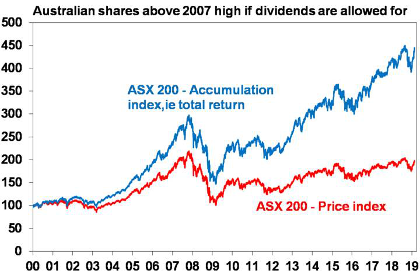 Another way to look at dividend income

How powerful investing for dividend income can be relative to investing for income from interest is illustrated in the next chart. It compares initial $100,000 investments in Australian shares and one-year term deposits in December 1979. 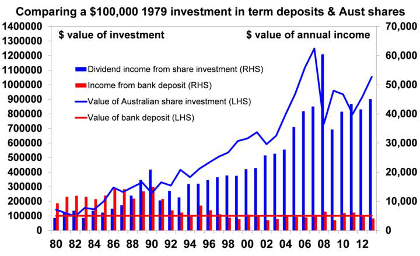 This issue has been wheeled out repeatedly since the GFC. But it’s ridiculous. First the rise in dividends this decade has mainly come from cashed up miners and it’s hard to argue they should invest more after the mining investment boom. Second the dividend payout ratio is not high historically. Third the reasons for poor business investment lie in: business sector caution after the GFC & the rise in the $A above parity, which squeezed competitiveness; the fall back to more normal levels in mining investment; and the shift to a capital lite economy based around IT and services. Don’t blame dividends for poor capex. 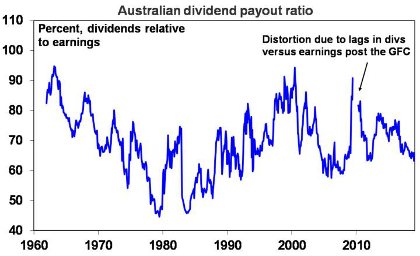 Why dividend imputation is so important

Dividend imputation was introduced in the 1980s and allows Australians to claim a credit against their tax liability for tax already paid on their dividends in the hands of companies as profits and boosts the effective dividend yield on Australian shares by around 1.3 percentage points. However, over the years it has been subject to claims that it creates a bias to invest in domestic equities, that it biases companies to pay dividends and not invest and that it benefits the rich. This is all nonsensical as dividend imputation simply corrects a bias by removing the double taxation of company earnings – once in the hands of companies and again in the hands of investors. The removal of dividend imputation would not only reintroduce a bias against equities but would also substantially cut into the retirement savings and income of Australians, discourage savings and lead to lower returns from Australian shares.

Labor’s proposal to make franking credits in excess of a taxpayer’s tax liability non-refundable could be argued to remove an anomaly in the tax system as dividend imputation was designed to prevent the double taxation of dividends, not to stop them being taxed at all. But a problem is that many Australians have planned their retirement around receiving such refunds. This is a subject for another note. But it is worth noting that Labor’s proposal does not affect at least 92% of taxpayers who will continue receiving franking credits as they have a sufficient income tax liability (as will pensioners who will be exempted). If it sets off a broader wind back of franking credits, then it would be a bigger concern.

Dividends provide a great contribution to returns, a degree of protection during bear markets and a great income flow. For investors needing income the trick is to have a well-diversified portfolio of companies paying high sustainable dividends.