Where are we in the search for yield? Is it about to reverse as the Fed starts quantitative tightening?

For some time now, the investment world has been characterised by a search for decent yield paying investments. This “search for yield” actually started last decade but was interrupted by the Global Financial Crisis (GFC) and the Eurozone debt crisis before resuming again in earnest.

When investment assets are in strong demand from investors, their price goes up relative to the cash flow (eg dividends, interest or rent) they provide pushing their yield down. This is evident in recent times in response to the “search for yield” with yields falling across the board as the next chart shows. 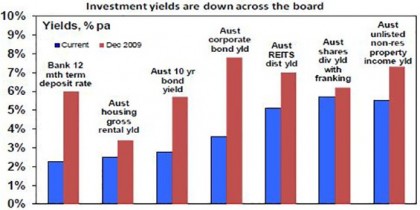 But everything goes in cycles. So has the “search for yield” gone too far? Will the US Federal Reserve’s shift to start reducing its bond holdings cause a reversal?

Drivers of the search for yield

Interest in yield based investing is not new and is in fact a normal part of investing. Particularly when investors are a bit wary about going for growth. In fact, in Japan it’s become pretty much the norm as interest rates have been stuck at zero for years. In the 1950s, yield focussed investing was the norm in the US and Australia. The search for yield also became apparent last decade and played a role in the GFC itself (as investors piled into yield based investments underpinned by “sub-prime” mortgages, oblivious of the risks). There are three main drivers of the “search for yield” in recent years:

Demand for yield from aging populations has further to go as populations age. For example, in Australia the share of the population aged 65 and over is projected to rise from 15% now to 22% by 2061. However, the second driver is cyclical and will reverse next time there is a sustained bout of risk aversion – just as it did in the GFC.

The first driver is a mix of structural and cyclical influences, though, and it’s probably been the main driver of the search for yield. Bond yields and interest rates have been trending down for 30 years or so and this is structural reflecting a downtrend in inflation, which resulted in a long-term super cycle bull market in bonds. But falls this decade also contain a big cyclical element reflecting the sub-par global growth and deflation seen after the GFC. This accentuated the super cycle bull market in bonds and put the search for yield on steroids. This is where the greatest risk of a reversal in the search for yield trade lies.

The logic of falling yields 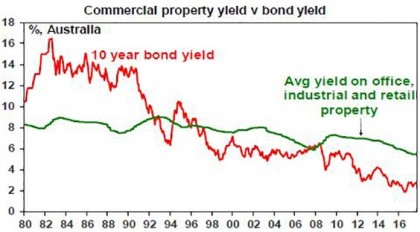 With Australian 10-year bonds yielding 2.8%, it’s little wonder investors might find commercial property on an average yield of around 5.5% more attractive particularly once capital growth of, say, 2.5% pa (ie inflation) for a total return of 8%, is allowed for. The property risk premium – the return potential property provides over bonds – at 5.2% remains high & well above early 1990s and pre-GFC levels that caused problems for property. 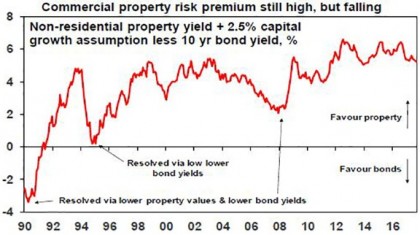 But are we getting close to a reversal?

Has it gone too far? The greatest risks are around corporate debt where the gap between US investment grade and junk bond yields and US government bond yields has narrowed sharply to around levels that prevailed prior to the tech wreck and again prior to the GFC. But as we saw in the mid-1990s and mid-2000s, spreads can remain low for a while before trouble arises, which is usually when the economy turns down and there is no sign of that just yet.

For equities the gap between the forward earnings yield on shares and bond yields has narrowed in recent years. But this gap – which is a guide to the risk premium shares offer over bonds – still remains relatively wide by pre GFC standards.

And finally for real assets, using commercial property as a guide, as indicated earlier the risk premium offered by commercial property relative to bonds remains wide, albeit it has narrowed as property yields have fallen and bond yields have risen (a bit). Overall, it’s hard to argue the search for yield has gone too far given how low bond yields still are. That said, corrections like what we saw in shares and corporate debt during 2015-16 are healthy in ensuring this remains the case.

The upswing in bond yields is likely to be gradual – with periodic spurts higher then fall backs like over the last year – as the Fed will likely be gradual, other central banks including the Reserve Bank of Australia are well behind the Fed in being able to tighten and yield focussed demand from aging populations will act as a constraint. But the trend in bond yields is likely to be up unless there is an unexpected relapse in global growth.

What does it all mean for investors?

There are several implications for investors: expect lower returns from government bonds as yields gradually rise; the search for yield likely has further to go in relation to commercial property and infrastructure but it is likely to wane as bond yields rise; share markets are now more dependent on earnings growth for future gains (and the signs are positive) but cyclical sectors geared to higher earnings will likely be the outperformers and yield plays may be underperformers. That the Fed is moving to start reversing its post-GFC quantitative easing (money printing) is another sign the global economy is getting back to normal. This is good for investors.