Where are we in the global investment cycle? What does this mean for investors?

It’s now a decade since the first problems with US sub-prime mortgages started to appear and nearly eight years since share markets hit their global financial crisis lows. From those lows in 2009 lows US shares are up 239%, global shares are up 167% and Australian shares are up 80% (held back by relatively higher interest rates, the absence of money printing, the plunge in commodity prices from their 2011 highs and the high $A). An obvious question is how close the next downturn is, which ultimately relates to where we are in the investment cycle.

The long US cyclical bull market

Cyclical bull markets in US shares since WW2 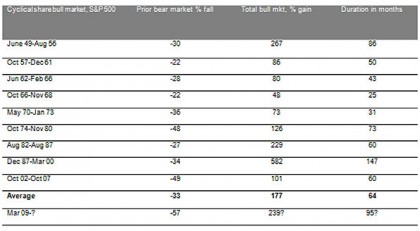 I have applied the definition that a cyclical bull market is a rising trend in shares that ends when shares have a 20% or more fall (ie, a cyclical bear market). Source: Bloomberg, AMP Capital.

Similarly, according to the US National Bureau of Economic Research the current US economic expansion that started in June 2009 at 92 months old is the fourth longest since 1929 and compares to an average expansion of 70 months. With the US cyclical bull market and economic expansion both now long in the tooth, some fear that US shares are vulnerable to another bear market and by implication given the direction setting influence of the US share market, global and Australian shares would be vulnerable too. A related concern is that, with the US economic expansion already longer than normal, any stimulus that President Trump may provide risks overheating the US economy and much higher interest rates which could bring on a bear market.

The next chart shows a stylised version of the investment cycle where the thick grey line represents the economic cycle.

A typical cyclical bull market in shares has three phases:

Typically the bull phase lasts 3-5 years. But it varies depending on how quickly recovery precedes, excess builds up, inflation rises and extremes of overvaluation and investor euphoria appear. As a result “bull markets do not die of old age but of exhaustion”.

So where are we now in the investment cycle?

So right here the big question is: are we in the “euphoria” phase that ultimately leads to the “exhaustion” of the cyclical bull market in shares and the next bear market? The best way to look at this is to look at economic conditions, monetary conditions, share market valuation and investor sentiment and positioning:

Firstly, in terms of economic conditions it’s hard to argue we are in the “euphoria” phase. There are few signs of economic excess: 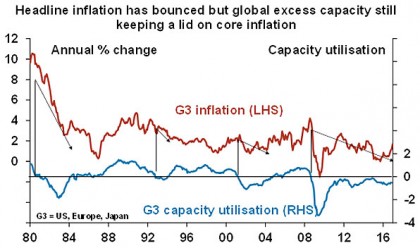 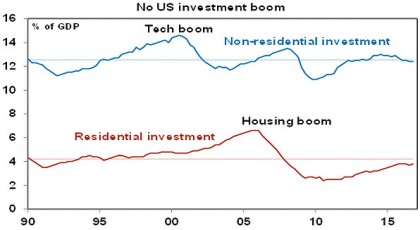 Secondly, global monetary conditions remain easy and in the absence of broad based excess (in growth, debt, or inflation) look likely to remain so. Yes the Fed is likely to hike rates more aggressively this year but it’s still from a very easy base and other central banks (including the RBA) are either on hold or easing. So a shift to tight money that brings an end to the economic cycle looks a fair way off.

Thirdly, share market valuations are mostly okay. Sure, measured in isolation against their own history shares are no longer cheap. In fact, forward price to earnings multiples in the US and Australia are above long term averages. However, once the gap between share market earnings yields and still low bond yields is allowed for, shares are fair value to cheap depending on the market (next chart). 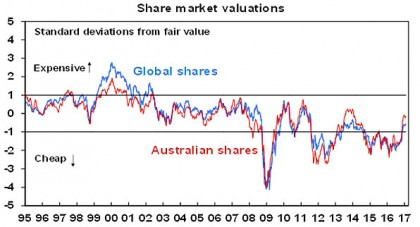 Fourthly, while short term investor sentiment is excessively bullish long term measures of positioning are not. In the US the huge investor flows into bond funds over the last few years have yet to reverse in favour of shares. In Australia sentiment towards shares as a wise destination for savings remains low and investors still prefer bank deposits. No euphoria here. 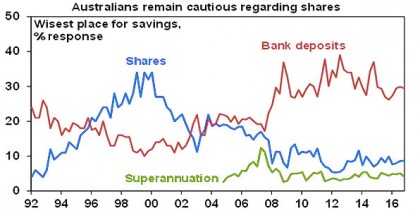 Finally, while the US cycle is more advanced, it could be argued that the 19% fall in US shares in mid-2011 was a bear market. So the bull market in US shares is perhaps not so old after all! Moreover, major non-US share markets and Australian shares did have a bear market in both 2011 and 2015-16 so their cyclical bull markets are not old at all. In this regard European and Japanese share markets are relatively attractive thanks to cheaper valuations and still dovish central banks.

Overall, we are still not seeing the signs of excess, euphoria and exhaustion that typically come at cyclical economic and share market peaks. So barring some sort of external shock, the cyclical bull market in shares looks like it still has further to go – particularly if global economic growth returns to more normal levels which in turn will help earnings.

With regard to any Trump fiscal stimulus, this analysis suggests there is still a bit of room for it before it causes the US economy to overheat. Particularly if the US dollar continues to trend higher, which takes some off the pressure of the Fed to raise rates. In any case it’s looking likely that fiscal stimulus in the US won’t hit till late this year and will unlikely to be more than 1% of US GDP given the constraints Congress is likely to impose. In fact the focus is more likely to be on providing a boost via economic reforms – deregulation, tax reform and inducements to invest – rather than traditional stimulus.

First, while corrections should be anticipated – with Trump and upcoming Eurozone elections being potential triggers – we still appear to be a long way from the peak in the investment cycle.

Second, non-US share markets and economies – notably Japan and Europe – are less advanced in their cycles and so provide opportunities for investors.