The threat to Australian house prices from Coronavirus

The Australian housing market was boosted from mid-last year by the combination of the Federal election removing the threat of changes to negative gearing and capital gains tax, rate cuts and regulatory easing. So, after a 10% drop in average capital city prices into mid last year – the biggest fall in property prices for at least 40 years – they have since rebounded by 9%. Our assessment was that price increases would slow from the pace seen since mid-year, but that the combination of low rates, solid population growth and the fear of missing out would still see solid price growth this year.

However, the coronavirus pandemic & associated shutdowns to economic activity now poses a significant threat to the outlook for property prices. The question is how big the threat is?

The absence of many Chinese buyers flowing from travel bans appears to have had little impact on property demand with clearance rates remaining strong in February. 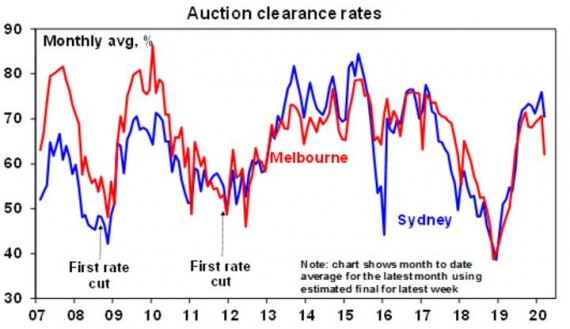 However, auction clearance rates and sales momentum are showing some signs of slowing this month. This may reflect an increasing desire on the part of buyers and sellers to put property transactions on hold to avoid being exposed to the virus unnecessarily. Social distancing policies will only intensify this. On its own this may crash transactions but may just flatten price gains.

Recession is the big threat

However, it’s the likely recession that we have now entered due to coronavirus related shutdowns that imposes the big risk. We expect at least two negative quarters of GDP growth in the March and June quarters with the risk that the September quarter is also negative. And the contraction could be deep because big chunks of the economy will be largely shut – tourism, travel, and entertainment with a severe flow on to parts of retailing. The toilet paper, sanitiser and canned/frozen food boom may help supermarkets for a while – but as Deutsche Bank recently calculated for every $1 spent on such items there is $15 spent on things that are vulnerable to social distancing.

Past large share market falls have seen a mixed impact on property prices. The 1987 50% share market crash actually boosted home prices as investors switched from shares to property. But the key is what happens to unemployment as this often forces sales and crimps demand. Back in 1987 the economy remained strong and unemployment fell but the recessions of the early 1980s and early 1990s saw falls in average national capital city home prices of 8.7% and 6.2% respectively as unemployment rose. The GFC share market fall of 55% also saw a 7.6% home price fall, even though it wasn’t a recession, because unemployment rose from 4% to nearly 6%. 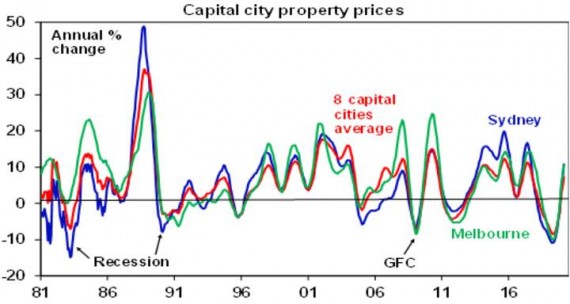 So, a lot depends on how deep the recession is and how far unemployment rises. Our base case is for a rise in unemployment to around 7.5% which is likely to drive a 5% or so dip in prices ahead of a property market recovery into next year as the economy bounces back and pent up demand is unleashed again helped by ultra-low interest rates. Government and RBA measures to help struggling businesses and households through the coronavirus shutdown should help in preventing a really big rise in unemployment.

However, if the recession turns out to be long – pushing unemployment to say 10% or more – then this risks tripping up the underlying vulnerability of the Australian housing market flowing from high household debt levels and high house prices. The surge in prices relative to incomes (and rents) over the last two decades has gone hand in hand with a surge in household debt relative to income that has taken Australia from the low end of OECD countries to the high end. 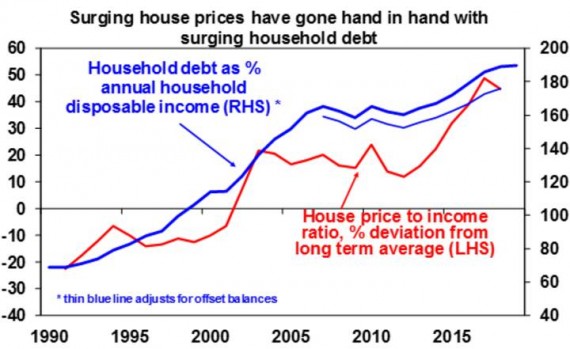 This is nothing new and we have long described it as Australia’s Achilles’ heel. Some things have given us a bit of confidence in recent times prices won’t just crash spontaneously.

We have always concluded that the combination of high prices and debt on their own won’t trigger a major crash in prices unless there are much higher interest rates or a recession. Unfortunately, we are now facing down the barrel of the latter. A sharp rise in unemployment to say 10% or beyond risks resulting in a spike in debt servicing problems, forced sales and sharply falling prices. This could then feedback to weaken the broader economy as falling home prices lead to less spending and a further rise in unemployment and more defaults and so on. This scenario could see prices fall 20% or so.

Bear in mind though that part of this would just be a reversal of the 9% bounce in average capital city prices seen since mid-last year.

It’s also not our base case but it highlights why governments and the RBA really have to work hard to avoid letting the virus cause a lot of company failures, surging unemployment and household defaults.