I have been working in and around investment markets for 35 years now. A lot has happened over that time. The 1987 crash, the recession Australia had to have, the Asian crisis, the tech boom/tech wreck, the mining boom, the Global Financial Crisis, the Eurozone crisis. Financial deregulation, financial reregulation. The end of the cold war, US domination, the rise of Asia and then China. And so on. But as someone once observed the more things change the more they stay the same. And this is particularly true in relation to investing. So, what I have done here is put some thought into the nine most important things I have learned over the past 35 years.

# 1 There is always a cycle

Droll as it sounds, the one big thing I have seen over and over in the past 35 years is that investment markets constantly go through cyclical phases of good times and bad. Some are short term, such as those that relate to the 3 to 5 year business cycle. Some are longer, such as the secular swings seen over 10 to 20 year periods in shares. Some get stuck in certain phases for long periods. Debate is endless about what drives cycles, but they continue. But all eventually contain the seeds of their own reversal. Ultimately there is no such thing as new eras, new paradigms and new normal as all things must pass. What’s more share markets often lead economic cycles, so economic data is often of no use in timing turning points in shares.

# 2 The crowd gets it wrong at extremes

What’s more is that these cycles in markets get magnified by bouts of investor irrationality that take them well away from fundamentally justified levels. This is rooted in investor psychology and flows from a range of behavioural biases investors suffer from. These include the tendency to project the current state of the world into the future, the tendency to look for evidence that confirms your views, overconfidence and a lower tolerance for losses than gains. So, while fundamentals may be at the core of cyclical swings in markets, they are often magnified by investor psychology if enough people suffer from the same irrational biases at the same time. From this it follows that what the investor crowd is doing is often not good for you to do too. We often feel safest when investing in an asset when neighbours and friends are doing the same and media commentary is reinforcing the message that it’s the right thing to do. This “safety in numbers” approach is often doomed to failure. Whether its investors piling into Japanese shares at the end of the 1980s, Asian shares into the mid 1990s, IT stocks in the late 1990s, US housing and dodgy credit in the mid 2000s or Bitcoin in 2017. The problem is that when everyone is bullish and has bought into an asset in euphoria there is no one left to buy but lots of people who can sell on bad news. So, the point of maximum opportunity is when the crowd is pessimistic, and the point of maximum risk is when the crowd is euphoric.

# 3 What you pay for an investment matters a lot

The cheaper you buy an asset the higher its prospective return. Guides to this are price to earnings ratios for share markets (the lower the better – see the next chart) and yields, ie the ratio of dividends, rents or interest payments to the value of the asset (the higher the better). Flowing from this it follows that yesterdays winners are often tomorrows losers – because they became overvalued and over loved and vice versa. But while this seems obvious, the reality is that many find it easier to buy after shares have had a strong run because confidence is high and sell when they have had a big fall because confidence is low. But the key point is that the more you pay for an asset the lower its potential return and vice versa. 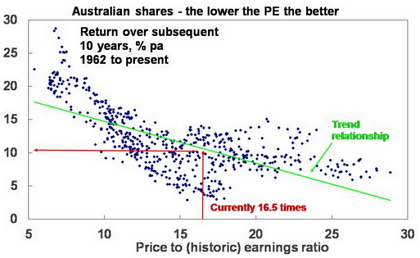 # 4 Getting markets right is not as easy as you think

In hindsight it all looks easy. Looking back, it always looks obvious that a particular boom would go bust when it did. But that’s just Harry hindsight talking! Looking forward no-one has a perfect crystal ball. As JK Galbraith observed “there are two kinds of forecasters: those who don’t know, and those who don’t know they don’t know.” Usually the grander the forecast – calls for “great booms” or “great crashes ahead” – the greater the need for scepticism as such calls invariably get the timing wrong (in which case you lose before it comes right) or are dead wrong. Market prognosticators suffer from the same psychological biases as everyone else. If getting markets right were easy, then the prognosticators would be mega rich and would have stopped doing it long ago. Related to this many get it wrong by letting blind faith – “there is too much debt”, “house prices are too high and are guaranteed to crash”, “the Eurozone will break up” – get in the way of good investment decisions. They may be right one day, but an investor can lose a lot of money in the interim. The problem for ordinary investors is that it’s not getting easier as the world is getting noisier as the flow of information and opinion has turned from a trickle to a flood and the prognosticators have had to get shriller to get heard.

A key lesson from the history of investment markets is that they don’t seem to learn. The same mistakes are repeated over and over as markets lurch from one extreme to another. This is even though after each bust many say it will never happen again and the regulators move in to try and make sure it doesn’t. But it does! Often just somewhere else. Sure, the details change but the pattern doesn’t. As Mark Twain is said to have said: “history doesn’t repeat, but it rhymes.” Sure, individuals learn and the bigger the blow up the longer the learning lasts. But there’s always a fresh stream of newcomers to markets and in time collective memory dims.

This one goes way back to my good friend Dr Don Stammer. One dollar invested in Australian cash in 1900 would today be worth $240 and if it had been invested in bonds it would be worth $950, but if it was allocated to Australian shares it would be worth $593,169. Although the average annual return on Australian shares (11.8% pa) is just double that on Australian bonds (5.9% pa) over the last 119 years, the magic of compounding higher returns leads to a substantially higher balance over long periods. Yes, there were lots of rough periods along the way for shares as highlighted by arrows on the chart, but the impact of compounding at a higher long-term return is huge over long periods of time. The same applies to other growth-related assets such as property.

# 7 It pays to be optimistic

The well-known advocate of value investing Benjamin Graham observed that “To be an investor you must be a believer in a better tomorrow.” If you don’t believe the bank will look after your deposits, that most borrowers will pay their debts, that most companies will grow their profits, that properties will earn rents, etc then you should not invest. Since 1900 the Australian share market has had a positive return in roughly eight years out of ten and for the US share market it’s roughly seven years out of 10. So getting too hung up worrying about the next two or three years in 10 that the market will fall risks missing out on the seven or eight years out of 10 when it rises.

Investing should be simple, but we have a knack for overcomplicating it. And it’s getting worse with more options, more information, more apps and platforms, more opportunities for gearing and more rules & regulations around investing. But when we overcomplicate investments we can’t see the wood for the trees. You spend too much time on second order issues like this share versus that share or this fund manager versus that fund manager, so you end up ignoring the key driver of your portfolio’s performance – which is its high-level asset allocation across shares, bonds, property, etc. Or you have investments you don’t understand or get too highly geared. So, it’s best to keep it simple, don’t fret the small stuff, keep the gearing manageable and don’t invest in products you don’t understand.

# 9 You need to know yourself to succeed at investing

We all suffer from the psychological weaknesses referred to earlier. But smart investors are aware of them and seek to manage them. One way to do this is to take a long-term approach to investing. But this is also about knowing what you want to do. If you want to take a day to day role in managing your investments then regular trading and/or a self managed super fund (SMSF) may work, but you need to recognise that will require a lot of effort to get right and will need a rigorous process. If you don’t have the time and would rather do other things like sailing, working at your day job, or having fun with the kids then it may be best to use managed funds. It’s also about knowing how you would react if your investment suddenly dropped 20% in value. If your reaction were to be to want to get out then you will either have to find a way to avoid that as you would just be selling low and locking in a loss or if you can’t then you may have to consider an investment strategy offering greater stability over time (which would probably mean accepting lower returns).

So what does all this mean for investors?

All of this underpins what I call the Nine Keys to Successful Investing which are: