A year ago there was a long global worry list and high on that list was China. A nearly 50% collapse in Chinese shares, uncertainty about the Renminbi, slowing Chinese growth, fears of a massive oversupply of residential property and uncertainty about the intentions of Chinese policy makers had left many convinced China was heading for the long predicted “hard landing”. But since then it seems China worries have receded. So what happened? Put simply the Chinese economy stabilised. But what’s the outlook for China now? And what does this mean for investors and Australia?

Chinese growth has stabilised and inflation is back

The continuing growth slowdown in China through 2014 and 2015 caused much angst and as a result Chinese economic policy swung from mild tightening towards stimulus with rate cuts, fiscal stimulus and an easing in measures designed to cool the property market. This worked. As can be seen in the next chart Chinese growth stabilised through 2016 at 6.7% and perked up to 6.8% year-on-year in the December quarter. Business conditions PMIs point to solid Chinese growth continuing into this year. 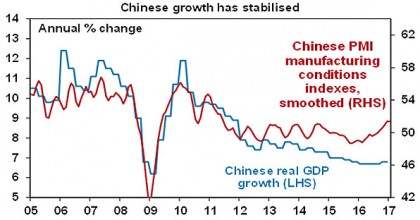 Industrial production and consumer spending have been stable. While investment has been softer, it looks likely to surge this year reflecting a jump in infrastructure projects. Excavator sales and power consumption have perked up. 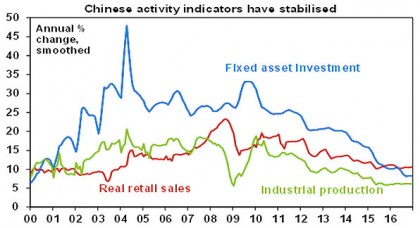 While there is a perennial debate about how reliable Chinese growth data is, a strong rebound in commodity prices from their lows around a year ago (iron ore up 140%, copper up 43%, oil up 100%) – while partly also due to other things – supports the notion of solid Chinese growth.

Finally, the Chinese residential property market has swung from a mild slump in 2014-15 through another boom which is now starting to cool again. The “ghost cities” paranoia of a few years ago has clearly not come to much with property demand returning once the property cooling measures of a few years ago were relaxed and prices taking off again. 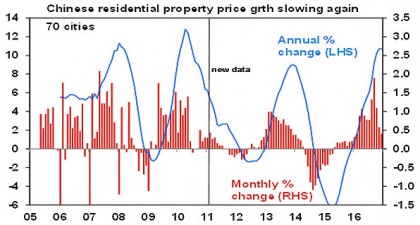 With the stabilisation in growth and rise in inflation the focus of Chinese policy makers has swung back to containing debt and home prices. Over the last six months property cooling measures have been ramped up again, government spending has slowed down and the PBOC has put through a modest mostly 0.1% lift in short term money market rates.

Policy tightening is likely designed to keep a lid on a further acceleration in economic growth but it is unlikely to get tight enough to slow growth substantially. We expect Chinese growth this year of around 6.5% and consumer inflation of 2.5 to 3%.

There are four key risks facing China. First, the Chinese policy tightening now underway could lead to another scare regarding the Chinese growth outlook. By the same token though the experience of the last few years tells us that the Chinese leadership’s tolerance for a significant growth slowdown is low. This is particularly likely to be the case with the Government wanting to look good ahead of the 19th National Congress of the Communist Party later this year.

Second, with the residential property cycle starting to slow again, fears may return that the property market is at last heading into a crash. Time will tell but it’s debatable as to whether China has really had a generalised housing bubble: household debt is low at around 40% of GDP; house prices haven’t kept up with incomes; and while there’s been excessive supply in some inland cities this is not so in first tier cities where there is an undersupply of affordable housing and the quality of the housing stock is low necessitating replacement. So the property crash fears continue to be exaggerated I think.

Thirdly, concern remains regarding China’s rapid debt growth. While it has slowed to around 15%, it’s still excessive relative to growth in the Chinese economy. However, several considerations suggest the risks are manageable. First, strong growth in debt reflects China’s near 50% savings rate with savings mainly being recycled via the banks and hence as debt. The solution is to consume more and channel a greater share of saving into equities rather than through banks. This will take time. Second, China is only borrowing from itself not from foreigners. Finally, high corporate debt reflects an element of fiscal policy and would be subject to Government support.

Finally, the risk of a trade war – which would be bad for China – has risen under President Trump. So far though Trump is talking of a “constructive relationship” and “mutual benefits” with China which is a positive sign.

Our assessment remains that these risks are manageable. The Chinese Government has plenty of firepower to support growth. So a hard landing in growth remains unlikely at this stage.

Since its low in January last year the Chinese share market has recovered around 20%. But it is still far from expensive. Chinese mainland shares (or A shares) are trading on a forward price to earnings multiple of 13 times and Chinese shares listed in Hong Kong (or H shares) have a forward PE of just 8 times.

With valuations looking reasonable and growth set to continue, Chinese shares should provide reasonable returns. However, a shift to policy tightening will constrain the rate of capital growth.

Why has the iron ore price surged higher?

After falling 80% from its high of $US192/tonne in 2011 to its low of $US38 in November 2015 the iron ore price has surprised most and surged to more than $US90. A range of factors have played a role in this including: stronger construction demand in China; a switch to higher quality iron ore to cut down on coking coal usage; reduced lower grade iron ore output from Chinese mines due to capacity closures, and; some supply disruptions and speculative activity on Chinese commodity exchanges. Some of these will reverse on a 12 month horizon but the surge does have a fundamental element and, with Chinese infrastructure projects still ramping up, the iron ore price could have more upside in the short term to maybe $US100 before the price settles a bit lower. A sign of the top may be when resource analysts raise their iron ore price forecasts above the current spot price. With consensus forecasts around $US60 they are a long way from that just now.

Implications for Australia – it’s not 2003 but still good

The surge in the iron ore price along with other commodity prices has pushed up Australian export prices and pushed the trade surplus to record highs. This is unlikely to lead to the sort of boost the economy saw last decade where surging resource commodity prices year after year led to surging Federal taxation revenue (and annual tax cuts) and a massive mining investment boom. This time around tax cuts are less likely due to tougher budgetary conditions, mining companies are just recovering from the last mining investment boom, the $A is starting from a much higher level than at the start of last decade ($US0.77 versus $US0.48) – and so the constraint on the non-mining part of the economy is much higher now – and finally we are unlikely to see year after year of bulk commodity price increases given structurally lower growth in China and a surge in the supply potential of commodities. Nevertheless, rising national income is better than falling national income and it supports the view that the hit to the economy from the mining boom collapse has largely run its course. All of which should help a return to GDP growth around 3%. The iron ore price at $US90/tonne will also knock nearly $9bn off the annual Federal budget deficit.