The Australian economy in 2019 – house prices, growth and interest rates – another cycle extension

2019 is likely to be an interesting year for the Australian economy. Some of the big drags of recent years are receding but housing is turning down, uncertainty is high around the global outlook and it’s an election year, which will add to uncertainty. This note looks at the main issues around the housing downturn and what it means for the economy and investors.

September quarter GDP growth was just 0.3% quarter on quarter or 2.8% year on year and was well below expectations. 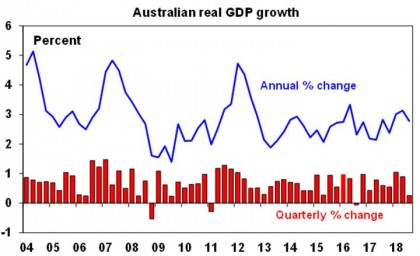 It was concerning for two reasons. Firstly, it suggests that the pickup in growth seen in the first half of the year was an aberration. And secondly it highlighted that the fears around consumer spending as housing slows may be starting to be realised as consumer spending was the big downside surprise.

For years we have felt that the combination of surging household debt and surging house prices was Australia’s Achilles heel in that it posed the greatest domestic threat to Australian growth should it all unravel. But we also felt that in the absence of a trigger it was hard to see it causing a major problem. However, over the last year a combination of factors have come together to turn the housing cycle down and create a perfect storm for house prices in Sydney and Melbourne.

These include: poor affordability; tight credit conditions; a surge in the supply of units; a collapse in foreign demand; borrowers switching from interest only to principle and interest loans; fears by investors now that changes to negative gearing and capital gains tax if there is a change of government (assuming Labor can get it through the Senate) will reduce future demand for their property investment; all of this is seeing the positive feedback loop of recent years (of rising prices > rising demand > rising prices etc) give way to a negative feedback loop (of falling prices > falling demand > falling prices etc). This could all be made worse if immigration levels are cut sharply.

Auction clearance rates have fallen to record lows (in terms of my records!) – which for Sydney and Melbourne are consistent with further price falls running around 8-10% pa – and housing credit continues to slow. 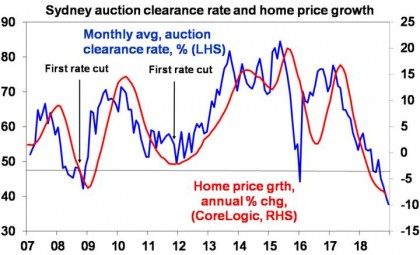 …leading to a drag on growth

While not on the scale of the property crashes seen during the Global Financial Crisis (GFC) in the US and parts of Europe, the Australian property downturn will have a significant negative economic impact. The main impacts are expected to be: 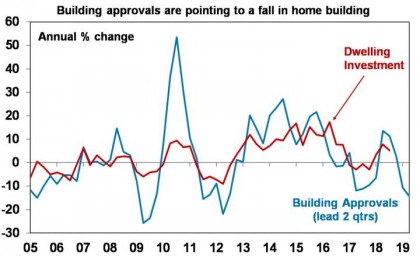 Taken together these could detract 1-1.2 percentage points from growth over the next year.

No recession, but constrained growth

Clearly a deeper slump in national property prices – say a 25% top to bottom fall rather than the 10% we are expecting – would cause severe economic damage but in the absence of much higher interest rates or unemployment causing mass defaults this is unlikely. Australia hasn’t seen the sort of deterioration in lending standards seen in the US prior to the GFC that saw people with “no income, no job, no assets (NINJA’s)” get loans and where the Fed raised rates 17 times over two years! And unlike in the US, Australian mortgages are full recourse loans so there is no “jingle mail”. So, a US GFC style surge in defaults adding to downwards pressure on prices is unlikely.
Barring a deeper property slump, a recession is unlikely: 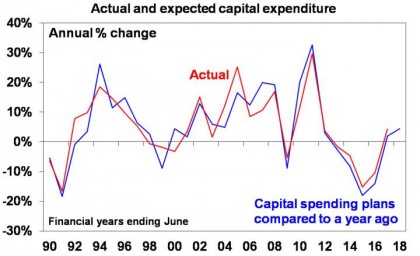 Given the cross currents, our assessment is that growth is likely to be around 2.5-3% going forward. This is not the recession some fear but it’s well down from the 3.5% pace the RBA expects.

Inflation to stay lower for longer

Growth around 2.5-3% won’t be enough to further eat into spare labour market capacity so the decline in unemployment is likely to stall (job vacancies appear to be slowing) and underemployment is likely to remain high at 8.3%. This in turn points to wages growth remaining weak. Meanwhile, it’s hard to see much uptick in other sources of inflationary pressure: competition and pressure for price discounting remains intense and commodity prices have fallen this year with the oil price falling over 30% from its recent high feeding through to lower petrol prices and the link between moves in the $A and inflation has been weak for years now. The latest Melbourne Institute Inflation Gauge points to a further fall in inflation into this quarter with its trimmed mean measure of underlying inflation up just 1.3% year on year in November. 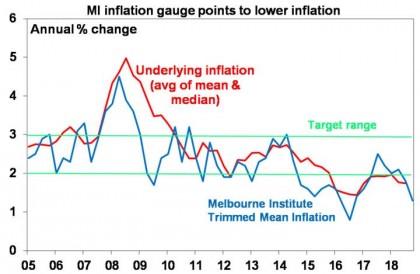 Against the backdrop of falling house prices, tight credit conditions and constrained growth, which will keep wages growth weak and inflation below target for longer we see the next move by the RBA being a rate cut. However, it will take a while to change the RBA’s thinking, so we don’t see rates being cut until second half next year but won’t rule out an earlier move if things are weaker earlier than we are expecting. By end 2019 the cash rate is likely to have fallen to 1%.

Rate cuts won’t be aimed at reinflating the property market but supporting households with a mortgage to offset the negative wealth impact on spending. A 0.25% rate cut roughly saves a household with a $400,000 mortgage $1000 a year in interest costs. And banks will likely have no choice to pass the cuts on given the bad publicity not passing them on will generate.

Second, with the RBA likely to cut rates and the Fed hiking (albeit slowing) the $A is likely to fall into the high $US0.60s.

Finally, while Australian shares are still great for income, global shares are likely to remain outperformers for capital growth. The housing downturn will weigh on retailers, retail property, banks and building material stocks.