After another (weather related) soft patch in the March quarter, Australian economic growth bounced back in the June quarter with quarterly growth of 0.8%, up from 0.3%. However, annual growth is still subdued at 1.8% year on year, which is well below potential of around 2.75%. In the quarter, growth was helped by a pick-up in consumer spending and business investment, strong public investment and a contribution from net exports after a detraction in the March quarter.

Australia continues to defy the doomsters’ endless recession calls. Against this, economic and underlying profit growth is lagging that seen in major economies. However, there are some positives pointing to a pick-up in growth. 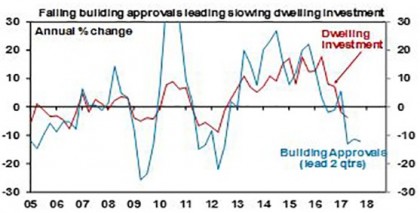 These worries are well known and despite them we remain of the view that recession will be avoided and growth will pick up over the year ahead: First, the growth drag from falling mining investment is nearly over. Mining investment peaked at nearly 7% of GDP four years ago and has since been falling at around 25% per annum (pa), knocking around 1.5% pa from GDP growth. At around 2% of GDP now, its weight in the economy has collapsed reducing its growth drag to around 0.4% this year and it’s near the bottom (see next chart). 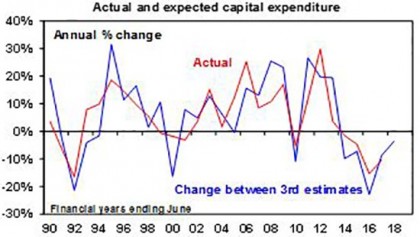 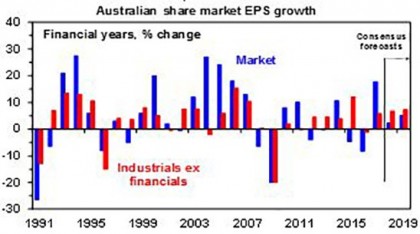 These considerations should ensure that the Australian economy continues to avoid recession and that growth should pick up to around a 2.5% to 3% pace over the year ahead. This should be enough to head off further cuts in the cash rate. But with growth still a bit below RBA forecasts, wages growth likely to pick up only slowly, inflation likely to remain subdued abstracting from higher electricity prices, and the RBA likely wanting to avoid pushing the $A higher, our view remains that the RBA will keep the cash rate unchanged at 1.5% out to the December quarter 2018 at least before starting to raise rates.

There are several implications for Australian based investors.

First, a return to reasonable growth is positive for growth assets. Australian shares are vulnerable to a short term US-led share market correction – given North Korean and Trump risks – but we remain of the view that it will be higher by year end.

Second, bank deposits are likely to provide poor returns for investors for a while yet, highlighting the case for yield-focussed investors to continue to look for superior sources of yield. The yield gap between Australian shares and bank deposits remains wide, driving a strong source of demand for shares. After Telstra cut its dividend, just make sure you get a well-diversified portfolio of stocks paying decent dividends though. 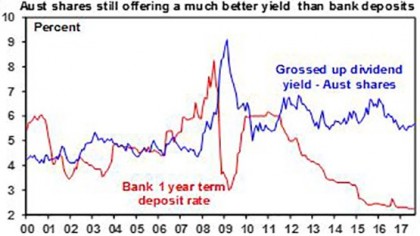 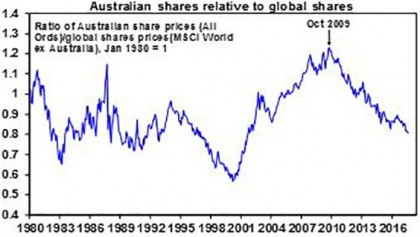 About the Author
Dr Shane Oliver, Head of Investment Strategy and Economics and Chief Economist at AMP Capital is responsible for AMP Capital’s diversified investment funds. He also provides economic forecasts and analysis of key variables and issues affecting, or likely to affect, all asset markets.