The 2019-20 Budget had three aims: to cement the Government’s fiscal credentials by delivering the long-awaited return to budget surplus; to provide fiscal stimulus to an ailing economy; and to help get the Government re-elected. It looks on track for the first thanks to a revenue windfall, this has provided room for fiscal stimulus and of course time will tell whether it makes a difference in the May election. Of course, while whoever wins the election will provide stimulus next financial year its timing and precise makeup won’t really be known for some time which makes the Budget a bit academic.

Thanks to stronger corporate revenue, better personal tax revenue thanks to higher employment and reduced spending the 2018-19 budget deficit is projected to come in at $4.2bn compared to $5.2bn in the Mid-Year review. The Government has assumed that this revenue boost is only temporary (see the “parameter changes” line in the table below) and has only used some of it to fund tax cuts and other measures. The net result is that the budget is projected to continue to reach a surplus in the next financial year, albeit its still only small at $7.1bn or 0.4% of GDP. The move to higher surpluses is slowed slightly by the fiscal easing from policy changes (predominately tax cuts).

However, note that the fiscal stimulus proposed for 2019-20 is actually bigger than that shown in the table below under “policy changes” as $3bn in tax cuts were already allowed for in the Mid-Year Review and if the already legislated tax cuts are allowed for in total its around $9bn or 0.5% of GDP. That said this is still relatively small and not enough to offset low wages growth and the negative wealth effect from falling house prices.

The already legislated tax cuts for higher income earners next decade are designed to satisfy the Government’s commitment from the 2014 Budget to cap tax revenue at 23.9% of GDP (or total revenue with dividends at 25.4% of GDP) on the grounds that this is around the historic highs. This cap is now projected to be reached in 2021-22. 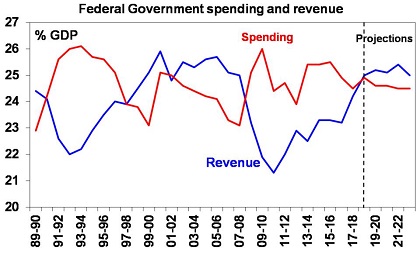 The Government’s growth forecasts look a little bit on the optimistic side, particularly the assumptions for wages growth. It remains hard to see wages growth rising significantly over the next few years given unemployment is not expected to fall and on our forecasts is expected to rise to 5.5%.

Like last year’s this is an upbeat Budget. First the near-term tax cuts for low to middle income earners will help households at a time of soft wages growth, falling home prices and tightening lending standards. But while roughly two times bigger than planned a year ago, this will still be relatively small though at around $20 a week (enough for 3 rounds of coffee and a muffin!). Second, the Budget continues to recognise that we cannot rely on bracket creep to cut public debt. The Australian tax system is already highly progressive and is becoming more so with the top 10% of earners accounting for roughly 45% of income tax revenue, up from 36% two decades ago. Compared to other comparable countries the top marginal tax rate is both relatively high and kicks in at a relatively low multiple of average earnings. In fact only the top 20% of income earners pay more tax than they receive in government benefits. If this is not limited it risks dampening incentive and productivity. Third, the continuing focus on infrastructure is good for short term growth, productivity and “crowding in” private investment. It will help to keep the economy growing. 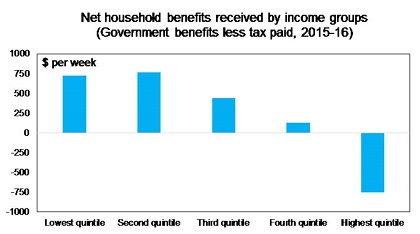 Finally, thanks to constrained spending growth and the surge in revenue in recent years the outlook for surpluses is positive. 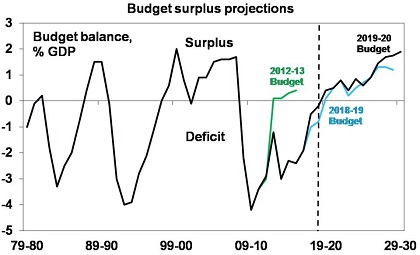 However, we have still seen a record run of 11 years of budget deficits. While our net public debt to GDP ratio is low at 19% compared to 78% in the US, 70% in the Eurozone and 156% in Japan, comparing ourselves to a bad bunch is dangerous. The run of deficits swamps those of the 1980s and 1990s and this was without a deep recession! Rather we have achieved this thanks to a combination of ramping up spending at the time of the GFC and then not reining it in again. Unlike prior to the GFC we have nothing put aside for a rainy day and there is a risk that the revenue surprise will prove temporary if global growth slows or more likely Australian growth and employment disappoints.

While the Government’s revenue growth assumptions for the years ahead are modest partly due to tax cuts and they are relatively conservative in assuming that the iron ore price falls back to $US55 a tonne, a big risk remains that wages don’t accelerate as assumed leading to a resumption of poor personal tax collections.

Finally, the budget strategy and fiscal stimulus comes with greater than normal uncertainty given the coming election in May and whether the tax measures pass parliament. A Labor Government would likely also undertake a similar sized stimulus but there may be a greater focus on government spending and the timing may be delayed as a new government would likely have a mini-budget in the second half of the year.

Implications for the RBA

While this Budget should provide some boost to household finances and confidence – the fiscal boost to the economy and household income is still relatively modest and uncertainty around its timing and details may dampen any positive announcement effect. So while it will help the economy it’s not enough to change our view that the RBA will cut interest rates twice by year end taking the cash rate to 1%.

Bonds – a major impact on the bond market from the Budget is unlikely. With Australian five-year bond yields at 1.4%, it’s hard to see great returns from bonds over the next few years albeit Australian bonds will likely outperform US/global bonds.

Shares – the boost to household spending power could be a small positive for the Australian share market (via consumer stocks) and there is an ongoing boost for construction companies. But it’s hard to see much impact on shares.

Property – the Budget is unlikely to have much impact on the property market. We expect Sydney and Melbourne home prices to fall further.

Infrastructure – continuing strong infrastructure spending should in time provide more opportunities for private investors as many of the resultant assets are ultimately privatised.

The $A – the Budget alone won’t have much impact on the $A. With the interest rate differential in favour of Australia continuing to narrow the downtrend in the $A has further to go.

The 2019-20 Budget has a sensible focus on providing support to households at the same time as returning the budget to surplus. However, the actual fiscal stimulus is pretty modest – particularly for a pre-election budget – and comes with greater than normal uncertainty given the upcoming election.

While every care has been taken in the preparation of this article, AMP Capital Investors Limited (ABN 59 001 777 591, AFSL 232497) and AMP Capital Funds Management Limited (ABN 15 159 557 721, AFSL 426455) (AMP Capital) makes no representations or warranties as to the accuracy or completeness of any statement in it including, without limitation, any forecasts. Past performance is not a reliable indicator of future performance. This article has been prepared for the purpose of providing general information, without taking account of any particular investor’s objectives, financial situation or needs. An investor should, before making any investment decisions, consider the appropriateness of the information in this article, and seek professional advice, having regard to the investor’s objectives, financial situation and needs. This article is solely for the use of the party to whom it is provided and must not be provided to any other person or entity without the express written consent of AMP Capital.