“Information is not knowledge, knowledge is not wisdom – Frank Zappa (and maybe some others)”

It may seem that the worry list for investors is bigger and more confusing than ever before. Some of this may relate to US President Trump’s disruptive and “open mouth” approach as highlighted by the “trade war” and his frequent and sometimes contradictory tweets. For example, on 24th July Trump tweeted “Tariffs are the greatest!” But 12 hours later he tweeted “The European Union is coming to Washington tomorrow to negotiate a deal on Trade. I have an idea for them. Both the U.S. and the E.U. drop all Tariffs, Barriers and Subsidies!”

Now I think I know where he was coming from, but all this noise can create a lot of uncertainty for investors. But noise around Trump is part of a broader issue around information overload and broader again in terms of what a report by the RAND Corporation – a US non-partisan research organisation – has called Truth Decay. As we have observed in recent years there seems to be a never-ending worry list for investors that is receiving greater prominence as the information age enables the ready and rapid dissemination of news and opinion. But we need to recognise that much of this is just noise and ill-informed and that there is a big difference between information and wisdom when it comes to investing. The danger is that information and opinion overload is making us all worse investors as we lurch from one worry to the next resulting in ever shorter investment horizons in the process.

“Just remember: What you’re seeing and what you’re reading is not what’s happening.” – President Donald Trump

Truth Decay – what is it & what are its consequences?

Truth Decay as analysed by the RAND Corporation report is characterised by: disagreement about facts and their analytical interpretation; a blurring between fact and opinion; an increase in the volume and influence of opinion and personal experience over fact; and declining trust in traditional sources of facts such as government and newspapers. It’s evident in: declining support for getting children vaccinated despite medical evidence supporting it; perceptions crime has increased when it’s actually declined; and a lack of respect for scientific evidence around global warming. Elements of Truth Decay were evident in past periods like the 60s & 70s, but increasing disagreement about facts makes the current period different.

The causes of Truth Decay include: behavioural biases that leave people susceptible to information and opinion that confirms their views and aligns with their personal experience; the information revolution and social media that have led to a surge in the availability of information and opinion and the rise of partisan news channels; educational systems that have not taught us to be critical thinkers; social polarisation with rising inequality and division attracting people to opposing sides that are reinforced by participating in social media echo chambers. The consequences include a deterioration in civil debate as people simply can’t agree on the facts, political paralysis, disengagement from societies’ institutions and uncertainty.

Why is Truth Decay relevant for investors?

Truth Decay is relevant for investors because: it could lead to less favourable economic policy decisions which could weigh on investment returns; and investors are subject to the same forces driving Truth Decay such that it explains why the worry list for investors seems more worrying and distracting. The first is a topic for another day, but in terms of the heightened worry list facing investors there are three key drivers.

First, just as with the broader concept of Truth Decay various behavioural biases leave investors vulnerable in the way they process information. In particular, they can be biased to information and particularly opinions that confirm their own views. People are also known to suffer from a behavioural trait known as “loss aversion” in that a loss in financial wealth is felt much more distastefully than the beneficial impact of the same sized gain. This likely owes to evolution which has led to much more space in the human brain devoted to threat than reward. As a result, we are more predisposed to bad news stories that alert us to threat as opposed to good news stories. In other words bad news and doom and gloom find a more ready market than good news or balanced commentary as it appeals to our instinct to look for risks. Hence the old saying “bad new sells”.

Secondly, thanks to the information revolution we are now exposed to more information than ever on both how our investments are going and everything around them. This has particularly been the case since the GFC – the first iPhone was only released in 2007! In some ways this is great as we can check facts and analyse things very easily. But the downside is that we have no way of assessing all the extra information and less time to do so. So, it can become noise at best, distracting at worst. If we don’t have a process to filter it and focus on what matters we can simply suffer from information overload. This can be bad for investors as when faced with too much information we can become more uncertain, freeze up and make the wrong investment decisions as our natural “loss aversion” combines with what is called the “recency bias” that sees people give more weight to recent events which can see investors project bad news into the future and so sell after a fall.

But the explosion in digital/social media means we are bombarded with economic and financial news and opinions with 24/7 coverage by multiple web sites, subscription services, finance updates, TV channels, social media feeds, etc. And in competing for your attention, bad news and gloom trumps good news and balanced commentary as “bad news sells.” And the more entertaining it is the more attention it gets, which means less focus on balanced quality analysis. An outworking of all this is that the bad news seems “badder” and the worries more worrying. Google the words “the coming financial crisis” and you get 115 million search results with titles such as:

In the pre-social media/pre-internet days it was much harder for ordinary investors to be exposed to such disaster stories on a regular basis. The obvious concern is that the combination of a massive ramp up in information and opinion combined with our natural inclination to zoom in on negative news is making us worse investors: more distracted, fearful, reactive and short-term focussed and less reflective and long-term focussed.

To be a successful investor you need to make the most of the power of compound interest and to do that you need to invest for the long term and not get blown around by each new worry. And the only way to do that is to turn down the noise on the worry list. This is getting harder given the distractions on social media. But here are five suggestions as to how to do so:

First, put the latest worry in context. There is always an endless stream of worries. Here’s a list of the main worries of the last five years: Fed tapering; the US Government shutdown; Ukraine; IS terror threat; Ebola; deflation; Greece & Eurozone debt; China worries; Australian recession fears, property & banks; Brazil and Russia in recession; oil price collapse; manufacturing slump; Fed raising rates; falling profits; Brexit; Trump; North Korea; South China Sea tensions; Italy; and trade wars. Even fund managers go from one worry to another as evident in the next chart that tracks what they nominate as the biggest risk over time. 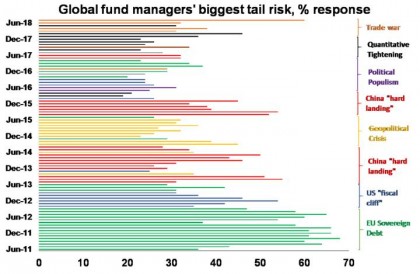 Yet despite all the worries, investment returns have been good with, eg, average balanced superannuation funds returning 8.5% pa over the last five years. The global economy has had plenty of worries over the last century, but Australian shares still returned 11.8% pa since 1900 and US shares 9.8% pa. 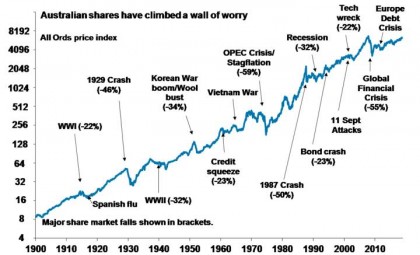 Some of the worries we hear much about come to something big, but most of the time they don’t with US and Australian shares rising seven and eight years out of 10 respectively since 1900. So is the latest worry is any more threatening than the last one?

Second, recognise how markets work. Shares return more than cash in the long term because they can lose money in the short term. So, while the share market is highly volatile in the short term – often in response to loss-averse investors projecting recent bad news and worries into the future – it has strong returns over rolling 20-year periods. Short-term volatility is the price wise investors pay for higher long-term returns.

Third, find a way to filter news so that it doesn’t distort your investment decisions. For example, this could involve building your own investment process or choosing a few good investment subscription services and relying on them.

Fourth, don’t check your investments so much. On a day to day basis the Australian All Ords price index and the US S&P 500 price index are down almost as much as they are up. See the next chart. So, it’s a coin toss as to whether you will get good news or bad on a day to day basis. By contrast if you only look at how the share market has gone each month and allow for dividends the historical experience tells us you will only get bad news about 35% of the time. And if you stretch it out to each decade, since 1900 positive returns have been seen 100% of the time for Australian shares and 82% for US shares. 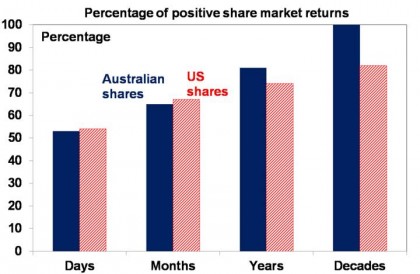 So, the less you look the less you will be disappointed and so the lower the chance that a bout of “loss aversion” will be triggered which leads you to sell at the wrong time.

Finally, look for opportunities that bad news and investor worries throw up. Periods of share market turbulence after bad news provide opportunities for smart investors as such periods push shares into cheap territory.