Has Australia really had three recessions in the last 28 years?

The claim that Australia has gone 28 years without a recession since the early 1990s recession ended in 1991 has been subject to some criticism in recent times with the economy sliding into a “per capita recession” where economic growth has been below population growth. Some have latched on to a recent Federal Reserve Bank of St Louis analysis that noted the 28 year claim should be “taken with a grain of salt” because “Australia has had three recessions since 1991 when looking at GDP per capita, the most recent one being from the second quarter of 2018 to the first quarter of 2019.”

It’s true that Australia’s relatively strong population growth helps grow the economy. And in terms of living standards it’s GDP per person or per capita that really matters and the recent slowdown in GDP growth to 1.4% year on year which is below 1.6% population growth is a big concern. I even wrote a note after the release of the December quarter GDP data entitled “Australia enters a per capita recession” (which can be found here). But it does not measure up as a conventional recession.

The conventional definition of recession is two or more consecutive quarters of falling real GDP. 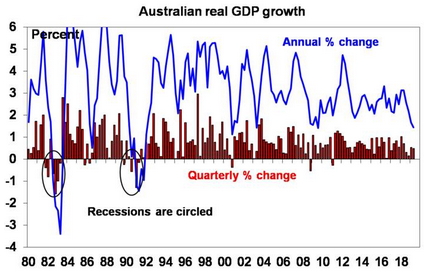 On this basis Australia’s last recession ended back in 1991, ie 28 years ago. 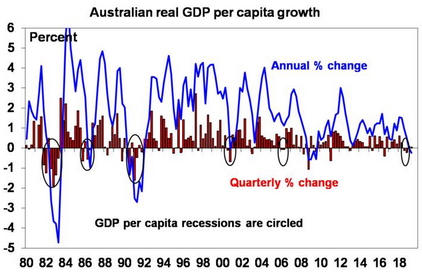 However, while it may be reasonable to call them “per capita recessions” they don’t compare at all to the scale of the conventional recessions in 1981-83 and 1990-91 that saw far deeper and longer falls in GDP and per capita GDP.

* Because there were two periods of consecutive quarterly declines in per capita GDP in each of the 1981-83 and 1990-1991 periods broken by one quarterly rise the Fed Reserve Bank of St Louis note ascribes two per capita recessions in each period although for all intents and purposes they were really each just one big recession. Source: ABS

Nor would the per capita recessions of 1985-86, 2000, 2006 and 2018 comply with wider definitions of recession such as that of the US National Bureau of Economic Research that defines a recession as “a significant decline in economic activity spread across the economy, lasting more than a few months, normally visible in real GDP, real income, employment, industrial production, and wholesale-retail sales.

For example, the next chart shows employment growth and unemployment since 1980 with per capita recessions shaded. 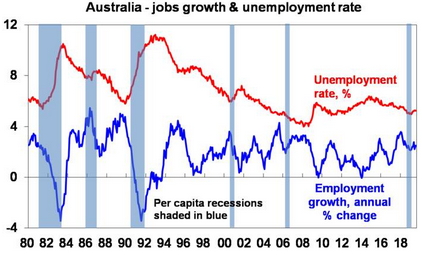 Which brings us to the smell test. For Australians like myself who lived through the early 1980s and early 1990s recessions it’s doubtful that they would recall the per capita recessions of 1985-86, 2000 or 2006 as real recessions. Which is why they are often just referred to as slowdowns. The 2000 slowdown occurred because of the pull forward of spending due to the start up of the GST and also the end of the Olympics and the 2006 per capita recession can hardly be seen as a recession given it was in one of the biggest booms in Australian history, ie the mining boom. And a common question in relation to the recent episode is “things aren’t that bad, so why is the RBA cutting?” (The answer being that waiting for a real recession is likely leaving it too late.)

Consistent with this, consumer and business confidence was bouncing around average levels in 2000, 2006 and more recently in contrast to the slump of the early 1990s. 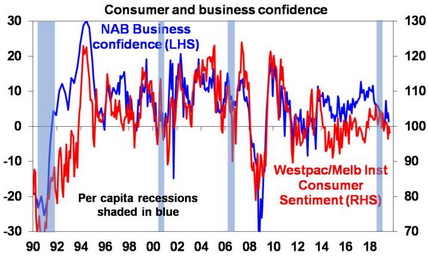 But what about through the GFC?

To be sure, Australian confidence had a recession-like fall through the global financial crisis (GFC) reflecting the dyer global news at the time and annual growth in GDP per capita fell, but there was only one quarter of contraction in both GDP and GDP per capita and there was no recession like slump in employment or rise in unemployment. What’s more the fall in per capita GDP at the time of the GFC was trivial compared to that in the US, Europe and Japan suggesting again that other things must have helped Australia beyond strong population growth. 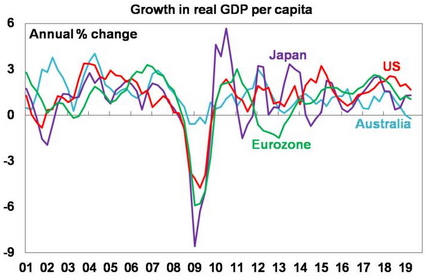 The slowdown in Australian growth to below the level of population growth at a time of weak wages growth and high underemployment is a real concern and highlights the need to boost growth and productivity. However, a per capita recession on its own is not the same as a real recession, and the three seen over the last 28 years do not compare to the recessions of the early 1980s and early 1990s in terms of their impact on jobs, economic welfare and confidence. Which is why they are normally just referred to as growth slowdowns as opposed to being recessions. To be sure the risk of conventional recession in Australia has increased – although for the reasons noted here I think it remains unlikely. But there is clearly more to Australia’s 28 years without a conventional recession than just strong population growth.