There is always someone telling us that there is some sort of economic/financial disaster coming our way. However, there does seem to be a higher level of hand wringing now about the global economic outlook than normal. These concerns basically go something like this:

This is all seen as being bad for global growth and hence growth assets, all of which is being heightened by the downturn in global growth seen over the last year or so.

Five reasons not to be too fussed.

There is no denying these concerns. Debt is at record levels globally. QE has been running in various iterations for more than a decade now in some countries. Inequality is up – albeit its mainly a US and emerging country issue. Support for market-friendly economic rationalist policies such as globalisation, deregulation and privatisation seems to have waned (except in France). And geopolitical risks are up. All these developments point to the risk of slower global growth and investment returns ahead and may figure in the next major bear market. But there is always something to worry about (otherwise shares would offer no return advantage over cash) and trying to time the next downturn is hard. Moreover, there are five reasons not to get too fussed about the global outlook.

1. Debt is more complicated than being at a record

History tells us that the next major crisis will involve debt problems of some sort. But what’s new – they all do! Just because global debt is at record levels does not mean that a crisis is imminent. There are several points to note here:

While Modern Monetary Theory has its issues, it does remind us that as long as a government borrows in its own currency and inflation is not a problem, it has more flexibility to provide stimulus than high public debt to GDP ratios suggest.

Quantitative easing and other unconventional monetary policies actually do appear to have helped. Since its high in 2013 unemployment in the Eurozone has fallen from 12% to 7.5% and in the US it fell from 9% in 2011 to 4% in 2017 enabling the Fed to start unwinding unconventional monetary policy. Inflation has not been returned to 2% targets, but wages growth has lifted and at the start of last year it looked like the global economy was getting back to normal. What kicked the global economy off the rails again was a combination of Trump’s trade wars, a debt squeeze in China and tougher auto emission controls. But this it wasn’t due to a failure of quantitative easing.

As to how quantitative easing is eventually unwound there is no easy answer, but there is no reason to believe that it will end with a calamity. First, in the absence of a surge in inflation necessitating a withdrawal of the money that has been pumped into the global economy there is no reason to withdraw it. And when inflation does start to rise it can be reversed gradually by central banks not replacing their bond holdings as they mature.

Finally, if push came to shove just consider what would happen if say the Bank of Japan told the Japanese government that it no longer expects payment at maturity for the 50% of Government bonds it holds? The BoJ would write down its bond holding and the Japanese Government would suffer a loss on its investment in the BoJ but that would be matched by a write down in its liabilities. Basically, nothing would happen except that Japanese government debt would fall dramatically!

3. Inflation and interest rates are low

The key thing that has caused many sceptics to miss out on good returns this decade is that they focussed on low inflation as reflecting low demand growth but missed out on the positive valuation boost to assets like shares and property that low inflation and low interest rates provides.

This is well known and has been done to death, so I won’t go over it suffice to say that there are still a lot of positives helping underpin the global outlook and these two remain big ones.

While the slowdown in global growth over the last 18 months has been scary and associated with share market volatility, the conditions are not in place for a deeper slide into global recession like we saw at the time of the GFC – excesses like overspending, surging inflation, excessive monetary tightening are not present. In fact, various signs are pointing to a cyclical global pick up ahead: 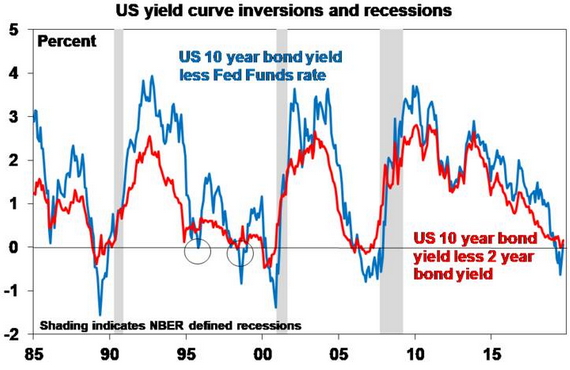 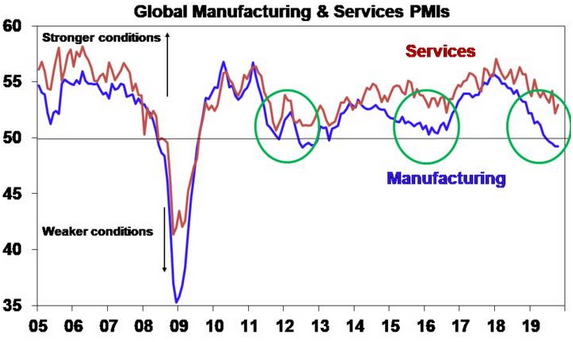 These could be pointers to global monetary easing getting traction. Of course, much depends on what happens to geopolitical risks. The US election next year will be a big one to keep an eye on and beyond that US/China tensions look likely to be with us for years. But there is reason to expect some respite in the short term on the geopolitical front:

First, the economic slowdown in both China and the US is pressuring both to defuse the trade dispute in the short term. This pressure is greater now as Trump wants to get re-elected next year and knows that he won’t if he lets the US slide into recession or unemployment rise. China may prefer to wait till after the election but is more likely to opt for the devil it knows.

Second, Trump’s avoidance of retaliation after the attack on Saudi’s oil production facilities in September shows a desire to avoid getting into military conflict in the Middle East.
Third, Brexit risks are on the back burner for now (although they could still come up again next year).

There is good reason to expect the global economic cycle to turn up in the year ahead just as it did after the growth in 2012 and 2016. This should be positive for growth assets like shares. Finally, for those worried that more and more debt will trade at negative interest rates our view is that this is unlikely: many countries have already sworn off using rates including the US and RBA Governor Lowe says it’s extremely unlikely in Australia. And if growth picks up as we expect the proportion of global debt on negative rates will decline as it did after 2016.