I first ran through a set of five charts to keep an eye on regarding the global economy last September. Since then share markets plunged into December and have since rebounded. The rebound has been great, but we have seen such rebounds before only to see weakness resume so on its own it does not prove we are out of the woods. It’s rare for US shares to have a deep V recovery after a 20% or so fall as seen last year. And with share markets having run hard from their December lows and technically overbought some sort of short-term pull back is a high risk. But will it be the resumption of the downturn in shares that began last year or just a pullback setting the scene for the next leg higher? Our view is that it will more likely be the latter. We don’t see an imminent US, global or Australian recession. And the swing now underway towards more dovish/stimulatory global economic policy along with declining trade war risks will likely drive stronger global economic growth in the second half of the year. As a result this year is expected to ultimately provide decent returns for shares.

Of course, no one really knows for sure so this note revisits the five charts we see as critical to which way it will ultimately go and adds a table on US recession risks to monitor.

Global Purchasing Managers Indexes (PMIs) – surveys of purchasing managers at businesses in most major countries – are an excellent and timely guide to the state of the global economy. These remain high but they have been falling over the last year indicating slowing growth (as occurred into 2012 and 2016). There are some signs of stabilisation in the US, but they will need to improve more broadly to be consistent with our view that growth will pick up in the second half of the year. At least they are a long way from recessionary readings. 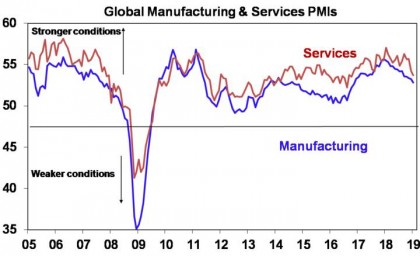 Major economic downturns are invariably preceded by a rise in inflation to above central bank targets causing central banks to slam the brakes on. At present, core inflation in major global economies is benign. In the US core inflation is just below the Fed’s 2% inflation target, which along with headwinds to growth has enabled the Fed to pause its interest rate hikes. Inflation in China has been falling and is well below the Government’s 3% target/forecast. And inflation in the Eurozone and Japan, is well below target and provides no constraint to ongoing policy stimulus with the ECB likely to soon announce another round of cheap funding for banks. A clear upswing in core inflation would be a warning sign of aggressive monetary tightening being on the way, but this keeps getting delayed by events like last year’s global growth slowdown and oil price collapse. 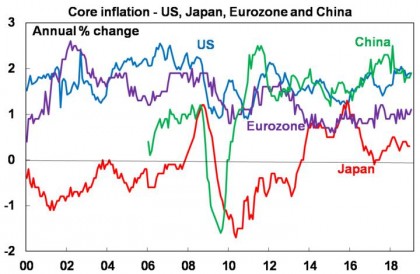 Chart 3 – The US yield curve 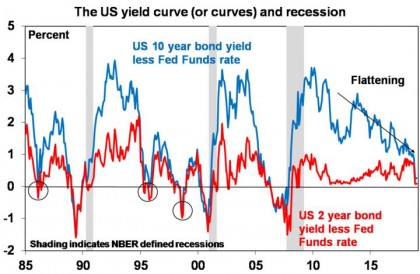 But there are several things to allow for. First, the yield curve can give false signals (circled on the chart) and the lags from an inverted curve to a recession can be around 15 months. So even if it inverted now recession may not arrive till mid next year and historically the share market has peaked 3-6 months before recessions, so it would be too far away for markets to anticipate.

Second, various factors may be flattening the yield curve which are unrelated to economic growth including near zero German and Japanese bond yields holding down US yields and high investor demand for bonds post the GFC as they have proven to be a good diversifier – rallying every time shares have a major fall.

Third, other indicators suggest that US monetary policy is far from tight – the real Fed Fund rate is barely positive, and the nominal Fed Funds rate is well below nominal GDP growth and both are far from levels that in the past have preceded US recessions.

So the yield curve is worth keeping an eye on – particularly now it’s flashing amber – but its short comings need to be allowed for.

Unlike moves in most individual currencies, which are only of relevance to the country they belong to, moves in the $US are of broad global significance. This is because of its reserve currency status and that a lot of global debt is denominated in US dollars particularly in emerging countries. So when the $US goes up like in 2015 and last year it makes it tough for emerging countries. It also depresses US company profits with a lag. 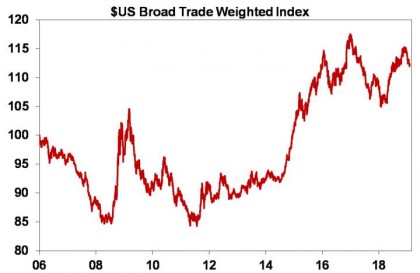 A continuing upswing would cause further damage for emerging markets and so pose a threat to global growth (as the emerging world is around 60% of global GDP). Since late last year the $US has come of its recent highs though – if it remains more benign as we expect it will help emerging market shares and US profits.

Growth in world trade may be expected to slow over time as services become an ever-greater share of economic activity and manufacturing becomes less labour dependent. But last year it was under threat from slowing global growth and the protectionist threat from President Trump in the US. This saw trade volume growth stall and trade war talk dent business confidence. So far US average import tariffs have been increased by less than 2% so it’s early days. But more has been threatened. Fortunately, the trade war is in a truce at present with positive signs regarding US/ China talks and slowing growth (and Trump’s desire to get re-elected next year) providing an incentive to reach a deal which we expect. But if the truce and trade talks with China, the EU and Japan fail and it’s back to escalating tariffs threatening a decline in world trade then it would be a bad sign. 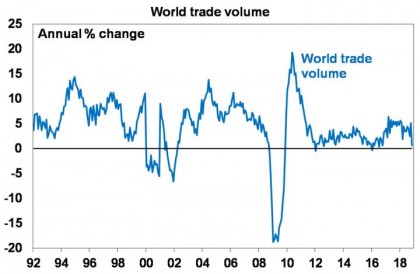 US recession still a way away

The historical experience tells us that what happens in the US is critical to how deep share market falls get. Deep (“grizzly”) bear markets like the 50% plus fall seen in the GFC are invariably associated with US recession. So, whether a recession is imminent in the US, and more broadly globally, is critically important in terms of whether a major bear market commenced last year or is on the way. The next table summarises the key indicators we are watching in this regard.

These indicators are not foreshadowing an imminent recession in the US. The yield curve is most at risk (hence the question mark) but even it is not there yet. Meanwhile, other measures of monetary policy in the US are not tight and we have not seen the sort of excesses that normally precede recessions – there has been no overinvestment in capital goods or housing, private debt growth has not been excessive, the US leading indicator is far from recessionary levels and inflation is benign. Maybe it could happen from mid-next year or it could be driven by an external shock like an intensified trade war but at this stage its not imminent, so our view remains that last year’s share market falls are unlikely to be the start of a deep bear market.

On balance these indicators still suggest the outlook remains okay. But to be consistent with our view that this year will see decent returns from shares we need (and expect) to see global growth indicators such as PMIs stabilise and head higher in the months ahead, inflation to remain benign, the $US to be relatively constrained and the trade threat continue to recede.

While every care has been taken in the preparation of this article, AMP Capital Investors Limited (ABN 59 001 777 591, AFSL 232497) and AMP Capital Funds Management Limited (ABN 15 159 557 721, AFSL 426455) makes no representations or warranties as to the accuracy or completeness of any statement in it including, without limitation, any forecasts. Past performance is not a reliable indicator of future performance. This article has been prepared for the purpose of providing general information, without taking account of any particular investor’s objectives, financial situation or needs. An investor should, before making any investment decisions, consider the appropriateness of the information in this article, and seek professional advice, having regard to the investor’s objectives, financial situation and needs. This article is solely for the use of the party to whom it is provided.