Myth busting: the cost of setting up renewable energy in a home

Market research indicates the average Australian home has 17 connected devices; ‘smart’ devices in the internet of things that offer everything from efficiency to safety, convenience and entertainment.1  Renewable energy devices – behind the meter, on the roof and in your pocket – are the next frontier, offering real savings and the potential to power them all.

In 1981, you could buy a personal computer (PC) for about the same price as a used car. The next screen revolution – flat screen televisions – hit the market in the late 1990s to the tune of about $15,000 for a large model.

So it goes that breakthrough technologies seem to be underestimated and overpriced at the outset, but costs decline rapidly as the technology improves and adoption becomes widespread. 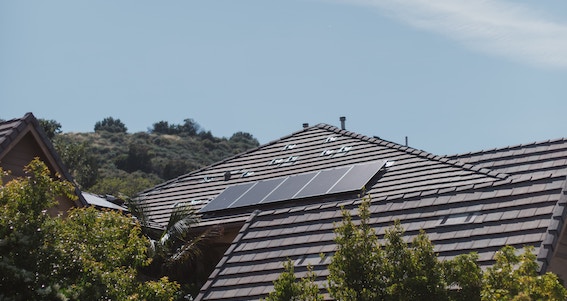 The declining cost of renewable energy

Similar dynamics can be observed in renewable energy technology.

The climate crisis upon us and finite reserves of coal and gas capture a decade-long debate about how our electricity should be produced. In mainstream debates, renewable energy is increasingly being understood as a necessity, not a choice, to future-proof energy sources for homes and businesses.

For example, in 2017, onshore wind was named the world’s cheapest way to produce electricity. Its unsubsidised levelised cost of energy (LCOE) range of US$30-60 per megawatt hour (MWh) fell below the range of the cheapest fossil fuel, natural gas (US$42-78 per MWh). Solar was right behind as the world’s second-cheapest energy source, with the high end of its LCOE range (US$43–53/MWh) less than any other generation source. Globally, Australia has the lowest costs for solar-powered generation.3

If history repeats itself, this means that as energy companies transition their portfolios to hold greater proportions of renewable electricity generation, retail energy costs should decrease over time.

In the meantime, there are savings and gains to be made by investing in distributed energy resources (DER) that generate power directly for the home and reduce the amount of energy one needs to consume. Rooftop solar is the most common, with an investment case that’s more compelling than you might think.

Myth 1: Installing renewable energy in a home is a major expense

Rooftop solar, with or without a battery for storing your power, is one of the most commonly deployed DER solutions.

Recent market surveys indicate the average price across Australian capital cities for a 5kW system without battery storage is $5,100. A system of this size is generally suitable for a family of four and takes anywhere from two to seven years to pay for itself.4

As for batteries, market research suggests they are still relatively expensive, and the payback time will often be longer than the warranty period of the battery. The current cost is between $8,000 and $15,000 (installed), depending on capacity and brand.5  It’s worth checking what’s available in your area, as there are some government schemes that offer financial incentives. At a minimum, it’s worth making sure your system is ‘battery ready’ as battery costs are declining rapidly.

According to Clean Energy Council Chief Executive Kane Thornton, homes with rooftop solar are saving on average about $540 per year on their electricity bills.

This represents a 25 percent saving on the average annual electricity bill of $2,088 for a four-person home.6

According to Choice, the price of a 5kW solar system has fallen by around 58 percent in the last six years – and the technology is getting cheaper.

Distributed energy resources are set to play an increasing part in Australia’s energy system. These small-scale energy solutions are forecast to dramatically increase and deliver almost half of all electricity supplied by 2050.7

Solar is the most prevalent today and, while the technology is continually improving, it is already a compelling investment that is within the reach of many.

As technologies continue to improve, the choice and benefits for investor-owners in solar and other solutions should expand.